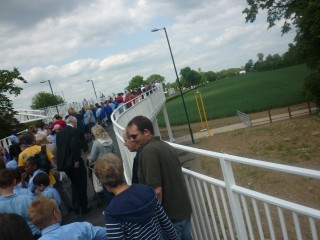 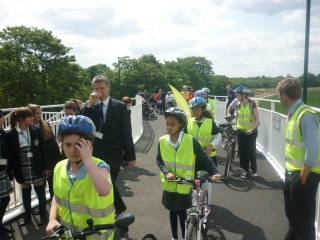 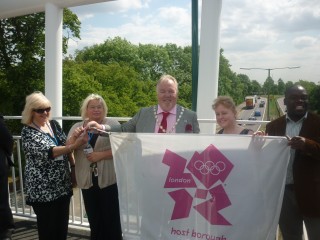 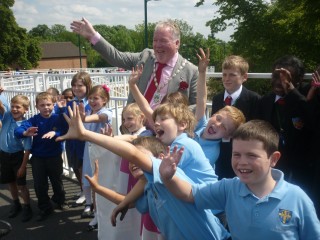 The new walking and cycling route from St Mary’s School to CedarsPark which includes the Paul Cully bridge and connects the two communities of Bury Green and Theobalds/Waltham Cross, was officially opened on Thursday 19 May 2011.  The opening was attended by the Leader of Broxbourne Council, Councillor Paul Mason, Mayor of Broxbourne, Councillor Eddy Rowland, other councillors, representatives of Sustrans, the Big Lottery Fund, local community groups, and other partners including Hertfordshire County Council and St Mary’s School.

The event included a relay passing of the London 2012 Games host borough flag on the bridge from cyclists to walkers. Cyclists left St Mary’s High School and cycled along the route, in convoy to the new bridge. The flag was then passed along the route by those on foot to CedarsPark where it was raised on the flagpole.

Leader of the Council, Councillor Paul Mason said: ‘I am tremendously proud of all the children who took part in the event today.  They are the future of the Borough and I hope that they are inspired by the fact that the Borough is hosting the London 2012 Games and that we may even see a few of them at future Olympic Games.’

Mayor of Broxbourne, Councillor Eddy Rowland commented that: ‘The new footpath and footbridge will enable the communities of Theobalds and Bury Green to come together and enjoy what each other has to offer.  It is fitting that these celebrations started and finished in CedarsPark where so many children and families are able to enjoy the facilities and events.’

Nigel Brigham, Sustrans’ Regional Director for the East of England, said, ‘This new route extends the National Cycle Network right into the communities of Bury Green and Waltham Cross, providing a fantastic link across the A10, which for so long has acted as a barrier to local journeys.

‘We know that people are willing to travel on foot or by bike where they are given a safe and attractive environment to do it.  We look forward to working closely with Broxbourne Borough Council in the future to extend the National Cycle Network right across the Borough.’

A portrait bench was unveiled by Sustrans Regional Director, Nigel Brigham and Broxbourne Council portfolio holder for direct services, Councillor Mrs Hazel Jackson, The bench forms part of a national art project from Sustrans and features a US airman Lieutenant Ellis, a canoeist and a badger.