By John A W Harris 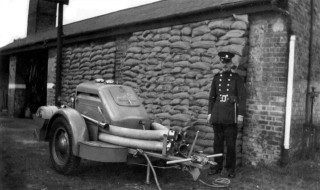 Fireman George Chapman at the scene of the crash.
John Haris

This has to be told. Many who read this will find what I am about to tell you very puzzling, especially families of the lost crew, because it will not fit into the events that have taken place in January 2011 at Cheshunt. What you are about to read is absolutely true, I am very close to this because it concerns my family. I myself was not far from the B-24 Liberator when it blew-up so this is all very personal to me. The only other place you will find a record of this is in “A SEARCH FOR THE TRUTH” Published April 2009. Lowewood Museum.

On the 12 August 1944 just before 0800 hr the fire station at Cheshunt “Gew’s Corner” received a phone call that an aircraft had crashed and was on fire, in a field next to the Cambridge Arterial Road, “location” Maxwell’s Farm. A fireman was sent in the hope of saving the crew of this aircraft, this fireman was my Uncle George Chapman. On arrival he was approached by a nurse, she said ‘I have seen some of the airman but they are not moving’, George said ‘do not go back it may blow-up at any time’, he then ran out the first 30 feet canvas fire hose from the pump-trailer. He had just returned to the trailer to pick up the next reel of hose when the Liberator bomber blew-up.

When he had recovered, finding himself wedged under the fire trailer, that he said had saved his life, how lucky can you be he said, had I been at the end of the first hose I would have been killed. Unfortunately this brave and unselfish effort by the only fireman present that day did not saved the 10 American airmen.

After my Dad was killed in Jan 1944 during an air-raid, George used to call in occasionally to see if we were ok when on his way home from the fire station, George was a very caring and sincere Uncle nothing was to much trouble  “This is why all the information contained here is correct.”

After the crash mum asked George about the airmen that were in the b-24 Liberator his reply was ‘all blown to pieces, identification would have been virtually impossible’. Later that morning “crash day”, George had finished dampening down much of the smouldering wreckage, with police in attendance keeping all the onlookers some distance away, because it was still a possibility that a stray bomb was left that had not exploded.

Eventually US personel arrived in two ambulances having travelled from AAF Bovingdon, station 112, their task was to collect the remains, George conferred with the Senior NCO then the crash site was sealed to the American recovery team. Regarding what you have read elsewhere NO other person was allowed onto this crash site. A collection of the crew was made then transported to the American Military Cemetery, Madingly, Cambridge for identification.

Some days after the crash George called in and not looking to good, mum said what’s up George, he made some comment about he was unable to get rid of a taste in his mouth I never did understand this comment, but while serving in the RAF in the early 50s I was at a jet fighter crash (a collision between two aircraft) I then understood what George’s comment was all about.

This b-24 crash has become very controversial in so many ways, a researcher in the US and two in the UK have tended to play down this fireman’s existence, one attempting to manipulate to his own benefit, to them George’s existence did not fit into their planned outcome, but unfortunately for them he was the only person that made any attempt to save the lives of ten brave young American airman on 12 August 1944.

I am still researching on this crash information has come to light and it concerns the nurse that spoke to Uncle George when he first arrived, she was an Army Nurse, Medical Corps, billeted in Cromwell Avenue, Cheshunt, at the time of the crash she may have been on her way to the Italian POW Camp No 1003 at Bullsmoor Lane, some time after the crash she wrote to the family of T/Sgt Stanley Jankowski the Flight Engineer.” why just Jankowski”   The nurse had said to George that she had seen some of the airmen (“possibly three, but was never stated”) this was most probably from the cockpit. Orders state that the Flight Engineer is required to assist the Pilot and Co-Pilot by sitting between then to help in a recovery if the aircraft had a extreme engine fault, Jankowski would have had all the technical knowledge to attempt this. “Uncanny” did she see Jankowski in the cockpit with Ellis and Salsby or was it just a coincidence” we shall never know why she wrote only to the Jankowski family.

This is to the memory of  George Chapman the only Fireman to attempt the rescue of 10 American Airmen at Cheshunt on the 12 August 1944, at 0800hr .