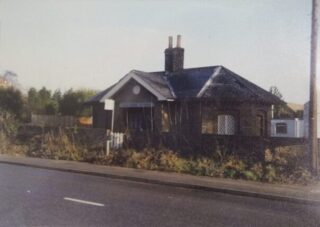 George Robson's almshouse about 1985. The wording above the porch is George Robson's Almshouses, as confirmed by photos from Carleton Photographic.
Photo by jack Edwards. Courtesy Hertfordshire Archives and Local Studies ref DE/Je/2/162 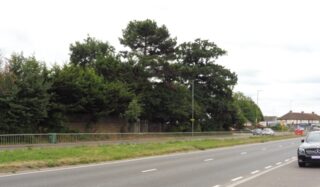 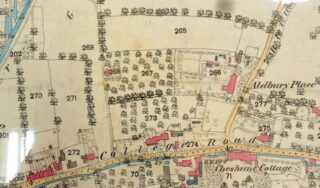 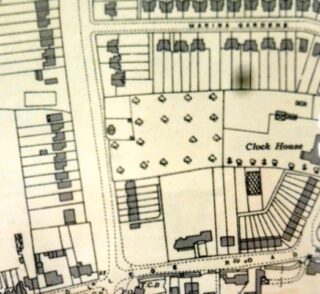 OS 25" map Hertfordshire XLI.8 1938. Shows Robson's almshouse after the construction of the A10 arterial road and some houses.
Courtesy of Hertfordshire Archives & Local Studies 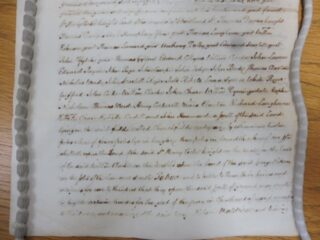 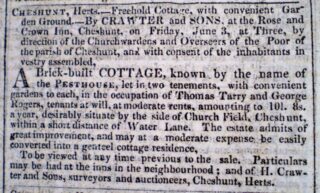 Cussans reports that George Robson, by a deed dated in 1616, gave 12 poles of land (303 sq m) ‘whereon two tenements have been built called the Pesthouses, and situate in Church Field, to the intent that some Almshouses might be erected upon the same for the provision of poor and impotent persons, and the relief of such as shall be visited in the time of infection’. The implication is that the pest houses (where people with infectious diseases could stay) were built first, the almshouses being built later. There is a deed kept at HALS dated 1610, so maybe that refers to the pest house, the almshouses following in 1616. It is not always easy separating references to the almshouses from the pesthouses. The vicar and churchwardens were tasked with selecting the residents.

There is a question about where they were built. Archer says they were located adjoining the Pest House Fields. An 1825 magazine cutting detailing the auction sale by Crawters mentions the pest houses were close to Water Lane, but as yet I have only managed to find a reference to Water Lane Farm on College Road. The sale was for the freehold. The sale notice added that the estate could be converted to a genteel cottage residence at reasonable cost. Jack Edwards believed the almshouses were rebuilt on the site of the parish pest house. However, if the Pesthouse had been sold, the almshouse could not have been built on that site.

The later site can be established, being shown but not annotated on the OS maps. It was at the western end of an orchard, next to the path leading from College Road to Churchfields. On the 1914 map, the orchard has a reference of 1183. This location was confirmed by an acquaintance who lived a few doors away when young. Until the 1920s it must have been an ideal location for a pesthouse but less so for elderly and infirm people, being rather remote from any other people.

An 1877 newspaper contained a report about the local Board of Health meeting. The need was for a property where sick people could be isolated.  The local surveyor told them of a brick and slated building called the pest house, occupied by paupers. The plot had a frontage of 60ft and a depth of 80ft (this equates to the 12 poles mentioned earlier). The building was divided. Each part had a dwelling room [15ft] by 12ft, and 10ft high, with a wash house and large garden to each half. A Mr Spurway moved that a vestry be called that they could claim, on behalf of the Board, the pest house and other property. It does not appear that any further action was taken. However, in late 1882 (5 years later) there were outbreaks of diphtheria at Flamstead and Scarlet fever at Waltham. Hence the matter of converting the almshouse to an isolation facility was again raised. Rev J Jessopp, of Norwich, was the owner and contacted the Board of Health with his objections. He pointed out that the almshouse was next to the path used by 80 – 90 children per day on their way to school, hence no use for isolation. He ‘promised’ various actions should the proposal go ahead.

The Beaumont Trust took over the running of the almshouses in 1913, which they renovated.

The building of the A10 arterial road in 1922 meant the almshouses were then by the side of what was later a rather busy road, and housing developments got under way.

The Beaumont Trust wanted to demolish the buildings and build two new ones on the site, but planning permission was only granted for one. A copy is held by The Beaumont Trust. Stipulations included no access to the Great Cambridge Road, any garages were for the use of private individuals, and the building had to be completely demolished before any rebuilding could take place. Any access would have been from Sandon Road. Hence the buildings were sold for £22,500 in about 1980. Carleton Photographic photographed the premises, which by then were quite overgrown. As a comparison, 3 bedroom terrace houses in nearby Hillside Avenue cost around £45,000 in 1983. The almshouse was demolished, about the same time as the Spital almshouses at Waltham Cross. The replacement for both was Homeleigh Court, built in 1982.

As far as records are concerned, various early deeds and documents are stored at HALS. The minute books from about 1930 are in the keeping of the Beaumont Trust, and are fairly complete.

Little is known about the residents from public records. The 1825 auction notice says the Pesthouse was inhabited by Thomas Tarry and George Rogers. The rental income was £10. 8s a year. There is a note in the minutes from 1978 that someone was still living in one of the properties; they moved to one of the almshouses at Turners Hill when their partner died.

DE/Ds/6/16 Copy of bargain and sale with feoffment of 12 poles in Churchfield, Cheshunt, to build a Pest House (1616)