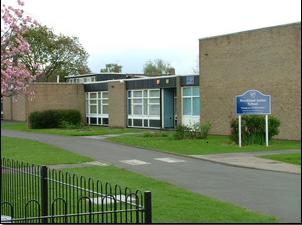 Brookland School , Cheshunt , is this year celebrating its fiftieth anniversary, having been opened in 1960.

Built in conjunction with the housing development between Mill Lane and Cadmore Lane , centred on Elm Drive , the school’s design was described at the time as a “controlled” experiment.  Though built to the pattern of earlier prefabricated schools in the area, such as Burleigh, Brookland was constructed with traditional techniques, and is spacious both indoors and outdoors.  The combination was the first in the county, and was featured in both Ideal Home Magazine and the Architects’ Journal in 1961.

The school was named after Samuel Brookland, a local baker and philanthropist who died in 1799.  During his lifetime, he provided the inmates of the local workhouse with bread, tea, tobacco and snuff, and in 1794 established an annuity to the workhouse of £3.10s (£3.50p in modern money, but worth a considerable sum in the 18th century).  His bakery stood on the junction of Cheshunt High Street and Cadmore Lane , until its demolition in the early 1960s, at which time it was called Moorfields.

The school opened with 67 pupils under the headship of Mr Stafford Young, who remained in charge for the next twenty years.  For the first five years, Brookland operated as a combined junior and infant school, after which a separate but linked infant school was opened.

A competition was held for the design of a school badge, and the winning design, created by Kevin Smith, is still in use today (pictured).

As it celebrates its first fifty years with a series of events, Brookland School is thriving under Mrs Val Foley’s headship, with 240 pupils attending.