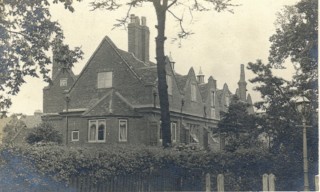 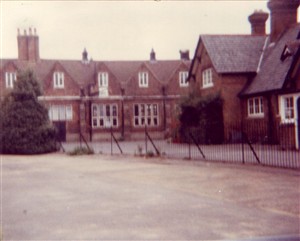 Dewhurst St Mary’s C.ofE. Primary School in Churchgate has its origins in the oldest school in Cheshunt, and the date of its founding, 1640, can still be seen inscribed on one of the buildings.

Robert Dewhurst, a lawyer who lived at the former Cheshunt Nunnery in Turnford, was born in 1577, the son of Barnard Dewhurst, secretary to Lord Burleigh.  In 1640, Dewhurst and his sister, Catherine Drywood, had a school built for the poor boys of Cheshunt.  The school’s management was handed over, two years later, to a board of trustees, together with two farms to generate the finances for its upkeep, and Dewhurst died in 1645.

The trust deed specified The school to remain for ever for the benefit of poor children of the parish for the teaching of them there to read English, so that they may know God the better, and also to write and cast accounts so that they may be better able to be apprenticed to some honest trade or mystery.

The deed also allowed for a master, though stipulating that he was not to be the parish vicar, and furnished twenty nobles for each boy leaving to be apprenticed.  A noble was a third of a pound, and this sum would have been beyond the families of most of the boys.  Various boys, in the early days of the school, were apprenticed to merchant-tailors, bakers, joiners, chandlers, weavers, cordwainers, shipwrights and chiro-barber-surgeon.

The school was not without trouble during the centuries that followed.  In the early 19th century, within a few years one master absconded after getting into debt, while another was dismissed for drunkenness and fraud.  A few decades earlier, however, a master called William Ward had been dismissed for extreme cruelty to the boys, two of whom had died from his tender ministrations.  Ward was merely given notice to leave “at Michaelmas next”, but the trustees supervised discipline more closely thereafter.

Various girls’ schools had been founded in the Churchgate area in the earlier 19th century, including an Industrial School, while the original St Mary’s Girls’ School, founded as a National School, was close to the Vicarage.  In 1872, a new St Mary’s Girls’ School was built adjacent to Dewhurst, and was enlarged in 1913 as a memorial to Frank Gissing Debenham of Cheshunt Park.  The schools merged in 1958, to form a Church of England primary school, which is still going strong on the original site.

Dewhurst’s original building of 1640, which has a Grade II* listing, is a red-brick building consisting of a single storey with attics, and a square projecting staircase tower on the western elevation.  Part of the western side has a 19th century extension, but the building as a whole is in remarkably good and near-original condition.

A more personal recollection of the school can be found in this article.