A superstar from Cheshunt 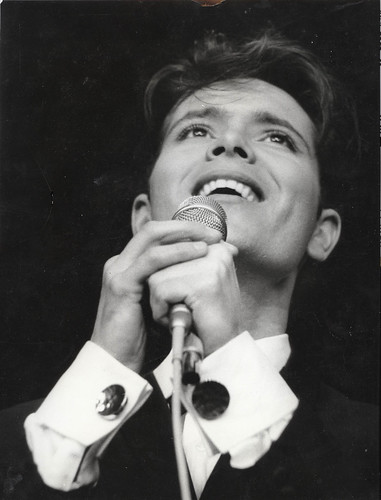 Possibly the most famous person to come from Cheshunt in the twentieth century is a singer and entertainer who shares only with Elvis Presley the distinction of having hits in the UK singles charts in each one of their first six decades.  He was described by John Lennon as producing the first British music worth listening to; he’s the biggest selling singles artist of all time in the UK; he’s a knight of the realm; and he once memorably led the centre-court crowd at Wimbledon in a rain-break sing.

Harry Rodger Webb was born on the 14th October 1940 in Lucknow, India, to a British father and an Anglo-Indian mother.  For the first eight years of his life, he grew up in first Lucknow, then the vicinity of Calcutta, before the family returned to Britain in 1948 after Indian independence.  They lived briefly in Surrey, before moving first to Waltham Cross, then to a council house in Bury Green, Cheshunt, after Harry’s father got a job for Thorn Electrical Industries in Enfield.

Harry attended Kings Road Junior School in Waltham Cross, then Cheshunt Secondary Modern (later Riversmead and now Cheshunt School) in College Road, Cheshunt.  He did reasonably well academically and stayed later than the minimum school-leaving age, and then got a junior clerical job for Atlas Lamps, later Thorn Lighting.  On a personal level, my father worked in the same department of the company at the time, and he later remembered young Harry’s stint there.

However, Harry’s love was for music, and his father bought him a guitar when he was sixteen.  Like most young musicians of his age (notably the Quarrymen, the Merseyside band that included a young John Lennon, Paul McCartney and George Harrison) he was drawn to skiffle and played with various skiffle bands.  By 1958, though, he was the lead singer of a rock & roll band called the Drifters and was attracting attention from the music industry.

Harry was persuaded to change his name, and by the time the band played their first major gig, at Ripley in Derbyshire, they were billed as Cliff Richard and the Drifters.  “Cliff” was intended as a pun on the “rock” in their music, while the surname was a tribute to his hero, Little Richard.

Cliff’s early image was as a mean and moody British answer to Elvis, but over the next few years he developed his own softer image, as his music became less hardcore rock.  His first hit single, Move It (supposedly written by the Drifters’ original guitarist on the 715 green line bus) was followed by a string of other hits, including Living Doll, The Young Ones and Summer Holiday.  Always live and often on record, Cliff was backed by the Drifters, who were forced to change their name, to avoid confusion with the US group of the same name, and became the Shadows.

Cliff’s long and sometimes controversial career is part of music history.  He lived for some years in Nazeing, near Broxbourne, and in 2004 a block of sheltered housing flats for the elderly in Cheshunt High Street was named Cliff Richard Court.

Cliff Richard’s music isn’t, perhaps, to everyone’s taste, but there’s no denying his importance in the history of British pop music.  Now in his 70s, he’s still going strong, and I wouldn’t bet against him extending that record to seven decades.