The Memoirs of Margaret Hurst Part One 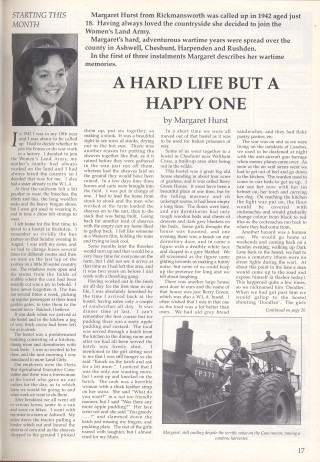 The decision to join

In 1942 I was in my 18th year and I was about to be called up. I had to decide whether to join the Forces or do war work in a factory. I decided to join the Women’s Land Army, my mother’s family had always worked on the land and I had always loved the country to I decided that was for me. I also had a sister already in the W.L.A.

At first the uniform felt a bit peculiar to wear, the breeches, the shirts and ties, the long woollen socks and the heavy brogue shoes, but I soon got used to wearing it, and in time a dress felt strange to wear.

‘the aroma from the fields of stubble where the corn had been recently cut was a joy to behold. I have never forgotten it.’

I left home for the first time, to travel to a hostel in Rushden. I remember so vividly the bus journey on that Sunday evening in August. I was with my sister, and we had to change buses several times for different routes and then we were on the last lap of the journey on a little 20 seater country bus. The windows were open and the aroma from the fields of stubble where the corn had been recently cut was a joy to behold. I have never forgotten it. The bus ran several times a week, picking up regular passengers at their front garden gates, to take them to the nearest town- Baldock I believe.

Arrival at the hostel

It was dark when we arrived at the hostel and in the kitchen a jug of very thick cocoa had been left for us to drink.

The hostel was a prefabricated building consisting of a kitchen, dining room and dormitories with bunk beds. I was so excited to be there, and the next morning I was introduced to more Land Girls.

Our employers were the Herts War Agricultural Executive Committee and there was a forewoman at the hostel who gave us our orders for the day, as to which farm we would be going to and what work we were to do there.

After breakfast we all went off to various farms, some in a van and some on bikes. I went with my sister to a farm at Ashwell. My sister drove the tractor pulling a binder which cut and bound the sheaves of corn and as the sheaves dropped to the ground I picked them up, put six together, so making a stook. It was a beautiful sight to see rows of stooks, drying out in the hot sun. There was another reason for putting the sheaves together like that, as if it rained before they were gathered in the rain just ran off them, whereas had the sheaves laid on the ground they would have been ruined. In a few days time three horses and carts were brought into the field. I was put in charge of one. I had to lead the horse from stook to stook and the men who worked at the farm loaded the sheaves on to the cart, then to the stack that was being built. Going back for another load of sheaves with the empty cart my horse liked to gallop back. I felt like someone in a Western film, holding the reins and trying to look cool.

‘I felt like someone in a Western film, holding the reins and trying to look cool.’

Some months later the thresher would turn up and that would be a very busy time for everyone on the farm, but I did not see it arrive at that time as I had left this area, and it was two years on before I did work with a threshing gang.

Can I have some more?

Having worked out in the fresh air all day for the first time in my life, I was absolutely famished by the time I arrived back at the hostel, having eaten only a couple of sandwiches all day. It was dinner time at last. I can’t remember the first course but for pudding there was a suety apple pudding and custard. The food was served through a hatch from the kitchen to the dining room and after we had all been served the hatch was firmly shut. I mentioned to the girl next to me that I was still hungry so she said “Knock on the hatch and ask for a bit more.” I noticed that I was the only one wanting more, but I went up and knocked on the hatch. The cook was a horrible woman with a thick leather strap on her waist. She said “What do you want?” in a not too friendly manner, but I said “Was there any more apple pudding?” Her face went red and she said “You greedy………!” and slammed the down the hatch just missing my fingers, and pudding plate. The rest of the girls roared with laughter, but I almost cried for my Mum.

In a short time we were all moved out of that hostel as it was to be used for Italian prisoners of war.

Some of us went together to a hostel in Cheshunt near Waltham Cross, a built-up area after being out in the wilds.

‘Some girls thought the house was haunted, and one evening there was a knock on our dormitory door, and in came a figure with a deathly white face and draped in a grey blanket. We all screamed as the figure came gliding towards us making a funny noise, but none of us could keep up the pretence for long and we fell about laughing.’

This hostel was a great big old house standing in about for acres of gardens, and it was called Berry Green House. It must have been a beautiful place at one time, but by the falling masonry and its unkempt rooms, it had been empty a long time. The floors were bare and our dormitories had only rough wooden beds and chests of drawers and dark grey blankets on the beds. Some girls thought the house was haunted, and one evening there was a knock on our dormitory door, and in came a figure with a deathly white face and draped in a grey blanket. We all screamed as the figure came gliding towards us making a funny noise, but none of us could keep up the pretence for long and we fell about laughing.

There was another large house next door to ours and the name of that house was just Berry Green, which was also a W.L.A hostel. I often wished that I was in that one as the food was a lot better than ours. We had old grey bread sandwiches, and they had flaky pastry pasties, etc.

The war was on and we were living in the outskirts of London, we used to be deafened at night with the anti-aircraft gun barrage when enemy planes came over. As soon as the air raid sirens went we had to get out of bed and go down to the kitchen. The warden used to come to our beds to get us up. I can see her now with her tin helmet on, her torch and carrying her dog. On reaching the kitchen the light was put on, the floor would be covered with cockroaches and would gradually change colour from black to red tiles as the cockroaches ran back to where they had come from.

Another hazard was a human one. We would go home at weekends and coming back on a Sunday evening, walking up Dark Lane back to the hostel, we had to pass a cemetery (there were no street lights during the war). At about this point in the lane a man would come up to the road and expose himself (a flasher today). This happened quite a few times, so we nicknamed him ‘Doodles’. When we had got past him we would gallop to the hostel shouting ‘Doodles’. The girls sitting beside the fire would grab pokers and fire irons and rush down the road after him, whilst the warden phoned the police. A big black police car would come speeding up, but the man was never found. I did hear years later that he was caught, and was a policeman, but that is just hearsay.

I did enjoy the time I worked in that area. I have so many happy memories of working in Cheshunt Park. It was there that the threshing machine turned up and I loved all the activity and preparation before the threshing commenced. The thatching had to come of the top of the stack, we had to each have a pitchfork and most important of all, find some string to tie the bottom of the legs of our dungarees, as there would be rats running around as we got to the bottom of the stack. It had been their warm home for some months so they were not too pleased to leave.

There were quite a few men to help with the threshing as it was heavy work filling the sacks of grain and carrying them to a barn. Conscientious Objectors and Displaced Persons worked on the land and later Italian and German prisoners of war.

It was mostly market gardening in this area, and I still recall having to go into a field one freezingly cold day to pick Brussel sprouts. I thought then, what had I let myself in for.