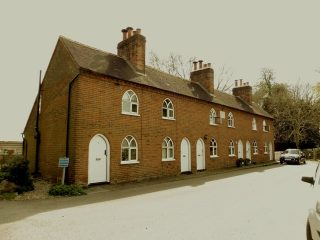 Day's almshouses. The datestone is in the centre just below to roofline. Dec 2017
Colin Wilson 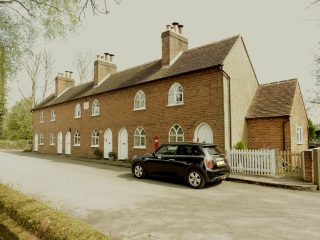 Day's almshouse. The letter box is clearly visible just by the front of the car. Dec 2017
Colin Wilson 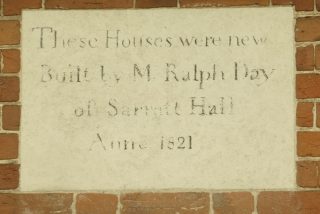 The datestone on the almshouse. Dec 2017
Colin Wilson 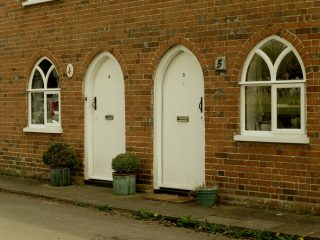 The simple but interesting design of the doors and windows. Dec 2017
Colin Wilson

Ralph Day was the main instigator of almshouse provision in the Sarratt and Chipperfield areas, though his brothers Henry and Thomas were involved. All three brothers are buried at Sarratt church.

As executor it seems he used Henry’s legacy to obtain Baldersley Cottage in Chipperfield, and provide some financial assistance. At Sarratt he arranged for Baldwin’s almshouse to be demolished and rebuilt, at his own expense, and made financial provision to the tune of £500 for the almspeople and other poor folk of Sarratt. Thomas’ contribution was in the form of funds for the two almshouses.

The Sarratt almshouses, in Church End opposite the church, were rebuilt in 1821 according to the date stone. The 1866 Herts Advertiser article cites 1781, but it’s uncertain where that date comes from. As Ralph died in 1831, 1781 would be when he was still fairly young.

The building itself is fairly plain with windows and doors of an interesting design. The rear view shows more modern windows. The datestone reads, ‘These houses were new built by M Ralph Day Anno 1821’. A minor point of interest is the letter box in the wall; this may be the only Hertfordshire almshouse with such a facility. The building was listed by Historic England in 1985, ref 1348247. According to Historic England, they are 6 dwellings, formerly almshouses.

A water supply from the main was installed in 1903 following the service of a notice to Rev E Riley. Repairs to the septic tank in about 2020 were helped with funding from the Sarratt and Chipperfield Community Foundation. There is a note on their website from Days’ Almshouses thanking them.

The almshouses are affiliated to the Almshouse Association (as at 2019) and registered with the Charity Commission.

Ralph Day is Joanna Staughton‘s great great grandfather. She kindly supplied the following information. ‘The Day family have lived in Sarratt since about 1600. Sarratt Hall, their home, appears in Tudor maps. I have a portrait of Ralph Day who built the almshouses with his brothers. The land was donated by the Clutterbuck family. The people who live there pay a ‘weekly maintenance contribution’ not rent. They are for the ‘poor and necessitous of the Parish of Sarratt’. I was a trustee for many years and now my daughter is’.

It’s nice to know that the six occupied almshouses are still in use, and that the family connections continue after 200 years.

Ralph Day’s will can be viewed on-line on the Ancestry website Ancestry.co.uk – England & Wales, Prerogative Court of Canterbury Wills, 1384-1858. It shows he had considerable lands. While the school is mentioned, the almshouses are not. This could be explained as the gift for almshouse upkeep was made by a deed in 1828.