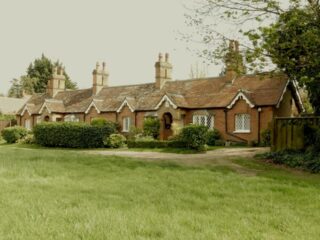 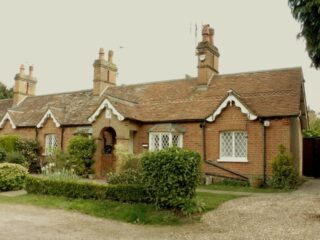 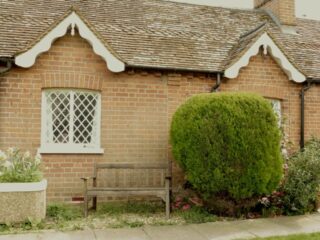 The junction between the two building phases, showing the size difference in the brickwork. Nov 2017
Colin Wilson 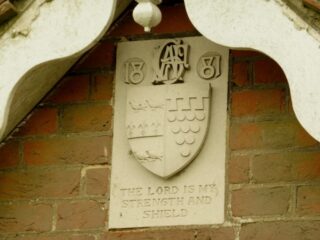 The earlier datestone. The other is similar. Nov 2017
Colin Wilson

John Saunders Gilliat was born in the USA, but educated at Harrow, then University College Oxford. He joined the family banking firm, and was successful enough to become the Governor of the Bank of England in 1883. He later became an MP.

In 1860 he married Louisa Babington. The following year he purchased the Cedars estate, demolishing and rebuilding the house. The couple were involved with the reforming and philanthropic Clapham Sect. His estate was in the region of £300,000 following his death in 1912 at the age of 83. Louisa died aged 79 in 1914, leaving effects of about £9,500.

He arranged for dwellings to be built for workers and servants from the Cedars estate. Other sources cite they were for aged servants, retired workers, or widows of farm workers. At that time the death of a husband would mean the widow would have lost her home, hence these dwellings would have been a lifeline for them.

One pair was built in 1881, with another pair added in 1906. They look like a single block, but there are subtle differences, such as larger bricks on the later (left hand) buildings. The porches contain date stones, which include the coat of arms and entwined initials. They are usually called Mrs Gilliat’s almshouses. Why, or what influence she had, has not been ascertained, but in 1881 women’s property rights had not been passed; that happened in 1882. Full rights were not obtained until 1926.

A Chorleywood Conservation area report from 2018 notes that the buildings are in original condition.

In a third codicil to his will, John Gilliat stipulated that the buildings would be for the benefit of the poor of Chorleywood following his death, and endowed them with £500. His son sold the estate the following year; the new owner gave Cedars House to the National institute for the Blind for use as a school. The school later moved to Worcester. The house is now a retirement home called The Cedars, not to be confused with the almshouses (which are sometimes called The Cedars).

One activity in about 1938 mentioned about the school for the blind was that the middle school would collect firewood, which was delivered to the almshouse women. In turn, the women would visit the school at the estate Christmas party.

The dwellings today are wheelchair friendly. A shop and bus stop are only 20 yards away. The post office, GP and town centre are a mile away.

The almshouses are administered by a trust chaired by representative of Christ Church. It is registered with the Charity Commission ref 218898 and affiliated to the Almshouse Association.  The aims of the Charity are the provision of housing accommodation for men and women who are in need, hardship or distress, and such charitable purposes for the benefit of the residents as the trustees decide.

Chorleywood conservation area report can be viewed at https://www.threerivers.gov.uk/download?id=23967

http://www.hertfordshire-genealogy.co.uk/data/places/places-c/chorleywood/chorleywood-cedars.htm contains brief notes about Gilliat and the house history

Notes about women’s property acts can be found at https://www.parliament.uk/about/living-heritage/transformingsociety/private-lives/relationships/overview/propertychildren/