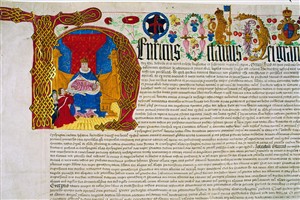 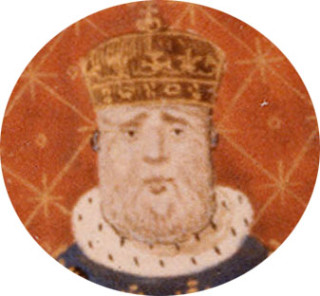 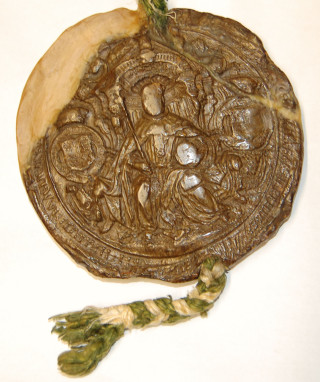 In 1516 letters patent replaced charters as the form in which royal grants were made. At the time of the Dissolution the manor of Codicote came to the King’s hands, and in 1544 it was granted by him to Robert Langley, with power of redemption within a year. The redemption must have taken place, for this document is a royal letters patent in which Henry VIII is granting the manor of Codicote and the rectory of Kirtlington, Oxford, to John and Lucy Penne. John Penne held the prestigious posts of King’s barber-surgeon and groom of the privy-chamber.

The beautifully illuminated initial letter H shows the easily recognisable form of Henry seated on his throne, with those he is granting the land to kneeling before him.

A beeswax and resin seal is attached to this document and is a fine example of a Great Seal. The front shows Henry on his throne holding the orb and sceptre, whilst on the reverse side he is shown hunting on horseback.

The obvious repair to the seal is deliberate. All archival conservation must be visible. It is not restoration and the original must be seen to be different. It must also be reversible, so that the new wax must melt at a lower temperature than the original, and can be removed if required at a later date.