You are here: Home>Tags>smallford forge>The Old Forge with Royal Connections

The Old Forge with Royal Connections 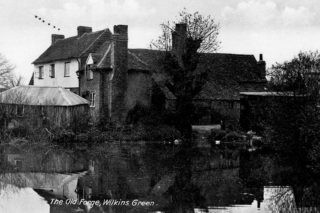 According to local legend the  Forge at Smallford was built under the orders of Henry VIII in 1540.  The building enjoyed a long and productive life as a functioning forge until the 1900s.  With an eye on safety and the risks of the furnace  flames spreading through the adjoining forest it was built over a mile from Hatfield House.  During the plague in London, Henry resided at Tyttenhanger Manor and the local legend expands upon the story by suggesting that he whiled away happy hours at the forge fascinated as he was by the blacksmith’s skill.  He watched them crafting his armour, weaponry and  his hunting equipment.

The forge is built on a triangle of roads at was a major exchange and provided a useful service shoeing the horses pulling the coaches on the Hatfield to Reading route.