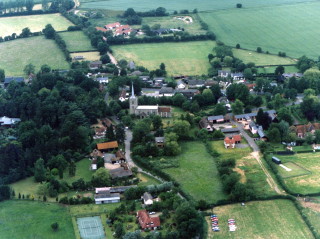 Cottered in 1994
Photo by Neville Chuck

I first moved to Cottered from Barley, Hertfordshire in March 1945 when I was six years old, having completed a year’s education at Barley School.

The reason for the move by my parents was that my father Bernard, a carpenter for a Walkern firm of builders, FR Canning & Sons, had until then to cycle daily from Barley to Walken – a distance of some fourteen miles.

The luxury of running water

We lived in one of the local authority houses, built shortly before the Second World War. Our home had running water and even a bathroom with a copper in the corner to heat the bathwater.

Just outside the back door in a separate block were a coal barn and a toilet – just a seat with a bucket, which was emptied in a pit in the garden at regular intervals by my father. There was a kitchen range for cooking and a sink in the scullery. We were indeed fortunate, as many homes did not the luxuries of water and electricity at this period. The old thatch cottages were dark and gloomy and several were in poor condition.

The village school, built in brick on part of the village green during 1829, was divided into Infants and Juniors with a teacher for each classroom. Jessie Anable taught the infants and Florence Ross, the Headmistress, the other children. A third, middle room was used for assemblies. Here we remained until taking the 11 plus.

I passed the exam but didn’t want to go to Grammar School, which my parents couldn’t afford, so I went to Baldock Secondary School.

In some ways Cottered hasn’t changed that much over the years. A few properties have been demolished, including the school, which was replaced in 1974 by a modern building. Sadly, this eventually closed due to lack of pupils. It is now the Guide HQ for Hertfordshire.

The former Off Licence and The Bell public house are now private dwellings, the former having had a large extension added to it. The Congregational Chapel, served by a minister from Buntingford ceased and converted into living accommodation. Several farms have ceased to function and much of their land sold off.

A modest Village Hall, largely built by voluntary labour, was opened in 1957. This was replaced by a much superior building, which opened in 2001. Additional local authority houses have been erected and a number of private dwellings have been built, mostly in-filling. Gone too are Cartwright’s little shop and the PO and Stores run for many years by the Edwards family.

The Parish Church, built in the 14th century, once shared its Rector with Throcking, is now served by a Priest-in-Charge who also has Ardeley, Walkern and Bennington to his list of parishes.

Some of the village organisations have ceased and others have taken their place. However, the horticultural society begun during the 1940s still thrives today.

The former 15th century manor house still retains part of its moat. In the 1950s it was the home of Food Minister & Home Secretary Major Gwilym Lloyd-George. He later became Lord Tenby and would often stop his car, wind down the window and have a chat with me. I was privileged to attend his Memorial Service in 1967 at St Margaret’s Westminster. When his widow died the family changed the date of the funeral at Cottered as they knew Lady Tenby would have wanted me to play the organ for it.

The wonderful Japanese Gardens with its variety of trees and shrubs, usually open once a year in aid of charity, are still in private ownership. Wealthy china merchant Herbert Goode following his visits to Japan created the gardens. I didn’t know him, but I knew his widow - in fact I was the organist for her funeral in 1964 when one of the hymns was “All things bright & beautiful.”

I also knew some of the family of Harley Street surgeon Sir James Cantlie who, long before my time, went out to Hong Kong to teach western medicine to the Chinese. One of his students was Sun Yat Sen who became a close friend of his and the first President of China.

Winning the Best Kept Village competition on four consecutive years, Cottered still has a strong community spirit, but probably not so strong as it was when I first moved here 65 years ago.

My book ‘Glimpses of Cottered’ published in 2006 by the Friends of Cottered Church, gives more details about the village. It is obtainable from the Local Studies Library at HALS.