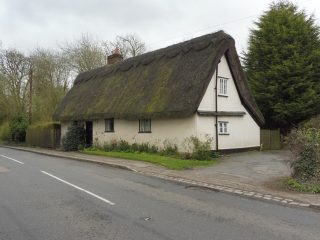 Like the Town House at Cottered, Page’s building was rebuilt on a new site, this time in 1691. The site of the first building is not known, but the later one was on the main road at the western edge of the village close to a rather tight bend in the road. The building is now known as Paddocks Wells.

A number of documents held at HALS may provide further information, but it was not possible to inspect them at the time of writing due to the Covid restrictions. The references are listed below.

The building was listed grade II by Historic England in 1984, ref 1348013. The NHLE entry says it was formerly called Nottinghams, which is backed up by the OS maps. However NHLE has a separate listing for Nottinghams on a site just round the corner. In addition there is a photograph held at HALS which shows Paddock Wells, The Kennels and Nottinghams.

This building is not mentioned by Victoria County History even though it mentions the Town Houses. Cussans does not mention any almshouses in Cottered.

The building is now in private ownership.

Readers are also referred to the Cottered Town Houses article.

DP/32/25/1; surrogate: mf 331
Town Lands charity accounts.
A volume which has been rolled up and tied. The income from this charity, which was given by Robert Page, appears to have been used for general parish expenditure and the accounts contain items more usually found in churchwardens’ or overseers’ accounts
1632 – 1696