You are here: Home>Herts history>Places>Almshouses>East Barnet. Clock and Watchmakers Asylum 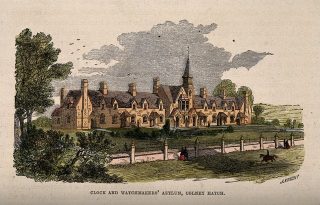 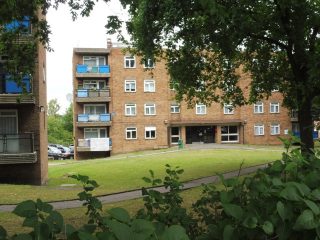 The Homestead, showing one of the block of flats. Jun 2020
Colin Wilson

This imposing building lasted for about a century. An article was printed in the Illustrated London News for April 24 1858, along with an illustration. The illustration by J Knight is now part of the Wellcome Collection. There is a statement indicating that contributions were paid during employment; this is unusual in almshouse provision.

The opening was also recorded in the Islington Gazette. The article noted that ‘the ceremony of laying the foundation of an asylum for the decayed and aged members of the [clock and watchmakers trades] took place.’ It was ‘situated in a delightful spot on the eastern side of the Colney Hatch Station on the Great Northern Railway’ [This was later New Southgate station]. It was ‘to be tudor style red brick with handsome stone dressings. The accommodation afforded was home, light and fuel and £20 per annum to men and £13 to widows’.

The home was available to all who had worked in the clock and watchmakers trade, regardless of religion, gender or race. The land cost £700, the building £2500 and grounds (including drainage) £100. At that stage funds for maintenance had not been established, but there plans to add two wings.

A picture was printed in the Illustrated London News for April 1858. This image, by Knight, is now owned by the Wellcome Collection.

Note these almshouses could not have been built by the British Watch and Clock Makers Guild as that group was only founded in 1907. The Worshipful Company of Clockmakers may be the founding organisation (this needs to be checked).

The records of the institution are held by London Metropolitan Archives, under the reference CLC/125/21345 – 21368. These include details of election of pensioners, the contracts for building the first premises, further buildings in about 1872-7 and two new buildings in 1898-1904, lists of donors and the endowed houses. Various fundraising activities were arranged, such as festival dinners and the annual thanksgiving service.

The Barnet Press (July 1879) reported on a second midsummer fete held in the grounds of the institution. The occasion was favoured with fine weather, and the almshouses—18 or nineteen in number—were gaily decorated with bunting. Visitors continued to arrive by every tram, and in the afternoon …

The Memorial House which was opened on Saturday and which has been erected in commemoration of the Goldsmith’s Company in increasing their annual subscription from £100 to £200. The object of the institution is to provide habitation, light, fuel and pensions for infirm members of the trade and their widows, a pension of £20 per year to each male and £13 to each female. No feeling of exclusiveness actuates the promoters of the work, and their desire is to enable the occupants of the almshouses to realise a home in every sense of the word.

The Barnet Press in 1892 noted that Christians had been meeting for worship for over 28 years in a little room over the Watchmakers’ Almshouses.

The OS map XLVI.13 (pub 1914) shows the location of the Watch & Clockmakers Asylum; in the 1937 edition it is recorded as The Homestead. One reference has been found that it was later the Friern Hospital, but this may be a confusion with the nearby Colney Hatch mental asylum.

The building was demolished a few years after 1955. The site is now occupied by blocks of 4 and 5 storey flats, still named The Homestead.

Knight’s image can be viewed on-line at https://wellcomecollection.org/works/v7ncpraa (site accessed May 2020)