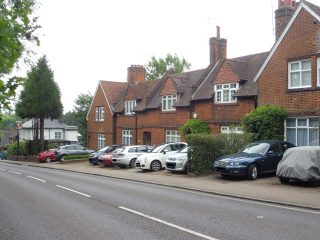 Former workers' dwellings on the site of Byng's almshouses. The white building at the extreme left is The Shteibel, formerly The Artichoke public house. Jun 2020
Colin Wilson

George Byng (1764 – 1847) was the great grandson of the ‘unfortunate’ Admiral Byng. He is not to be confused with George Byng, 2nd Earl Strafford who built the almshouses at Bentley Heath.

While there is a reference to the almshouses being built and endowed in 1840 (when he was in his mid 70s), the same article mentions them being represented in a woodcut from 1824 (this may be a mis-type for 1844). Described by Cussans as being three under one roof, they were located on Elstree Hill North, just to the south of The Artichoke public house.

The provision was for three women.

At a meeting in 1897 a Mr Belderson said that on the old almshouses there was a tablet which he understood stated that they were built and endowed. Mr Eames said the tablet mentioned nothing about endowment. However it also appears that the upkeep was settled on the parish (according to a comment made at a meeting about Gibbs’ almshouses held in 1895).

H H Gibbs (later Lord Aldenham) acquired the site in 1884, on which he built houses for workmen. He erected new almshouses near the crossroads further to the south. This involved a land swap.

There is an1855 newspaper article many of us can sympathise with. Mrs Pridmore, who ran The Artichoke next to the almshouses, received £250 in bank notes – a tidy sum in those days – so she wrapped them in a flannel which she sewed into her dress for safekeeping. Unfortunately she then sent the dress to Mrs Hamlin, a washerwoman nearly 80 years old who lived in the almshouses. She was described as strong and active as a woman half her age. Anyway, when Mrs Pridmore realised her mistake it was too late. The dress had been washed, though some dirty pulp had been found. While some neighbours suspected theft, Mrs Pridmore knew and trusted Mrs Hamlin. The hope was that the money would be refunded by the Bank if indemnity was provided. This is also one of the few examples of what some almspeople did with their time.

It should be noted that Vyse’s reference to Elstree Byng actually refers to the replacement buildings erected by H H Gibbs, Lord Aldenham.

Newspaper articles
These articles can be viewed online at the British Newspaper Archive website, as at Feb 2020

Herts Advertiser Saturday 17 May 1879 Page: 5
There are also in Elstree almshouses for three women, founded by the late Mr. G. Byng, M P. The general charities of the parish amount to £25 per annum.

Barnet Press Saturday 09 November 1895 Page: 2
… [Gibbs was] allowed to pull down the old houses, and take the land in exchange for that on which the present almshouses stand, on his building the present almshouses and settling them on the parish in the same way the old ones had been.—Mr Staples said he supposed …

Barnet Press Saturday 22 May 1897 Page: 6 Mr Belderson said that on the old almshouses there was a tablet which he understood stated that they were built and endowed. Mr Eames said the tablet mentioned nothing about endowment. The proposal was lost.

http://www.histparl.ac.uk/volume/1820-1832/member/byng-george-1764-1847 (site accessed May 2020) is a lengthy account of Byng’s parliamentary career. In it he is described as an ‘honest, stupid Whig’ and ‘the wealthiest commoner in England’.