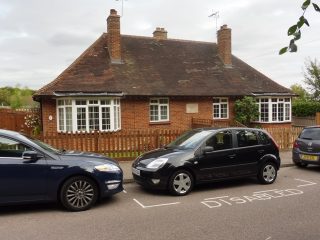 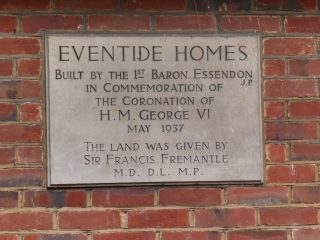 The dedication stone on the Eventide Homes. Sep 2016 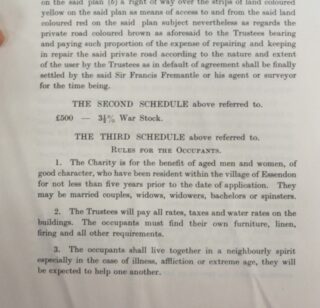 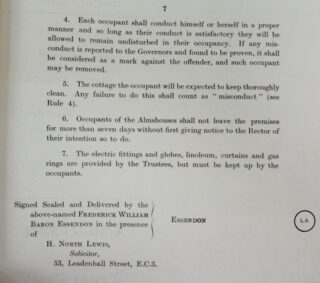 12 May 1937 was the coronation day for George VI. The Eventide almshouses at Essendon were erected in commemoration by Sir Frederick Lewis, Baron Essendon (1870 – 1944). The title was created for him in 1932 but became extinct on the death of his son. As chairman of Furness Withy he was a shipping magnate and had links to the insurance industry. The land was given by Sir Francis Fremantle, the MP for St. Albans from 1919 till he died in 1943. He lived at Hatfield. Photos of both men are held at the National Portrait Gallery. It would be nice to know what link these two gentlemen had with the village of Essendon.

The two almshouses were built along a private road, which is now public. The land amounted to about 14 poles. The deeds include a site plan.

The conveyance and trust deed mentioned by the Charity Commission is dated 30th July 1937. The date would suggest the almshouses were not opened at the time of the coronation but at a later date. The deed concentrates mostly on the management of the trustees and governors. There is a note that the original endowment was £500, 31/2% War stock. It could be used for repairs or future expansion. Any further donations or endowments should be used for the same purposes as the original.

Beneficiaries were aged men and women of good character who had lived in Essendon for 5 years prior to appointment. They could be men or women, whether married or not. They were expected to live peaceably with each other, and hep each other, especially in times of sickness or extreme age. While the trustees paid rates, taxes and water rates, the tenants had to supply their own furniture, linen and other requirements.

The objects of the charity are the maintenance of almshouses for the benefit of aged men and women who have been resident in Essendon for not less than five years. The accommodation consists of two semi-detached bungalows.

The almshouses are affiliated to the Almshouse Association and registered with the Charity Commission ref 219968.