You are here: Home>Tags>Flamstead>Frederick Charles Harvey, died in WW2 aged 16 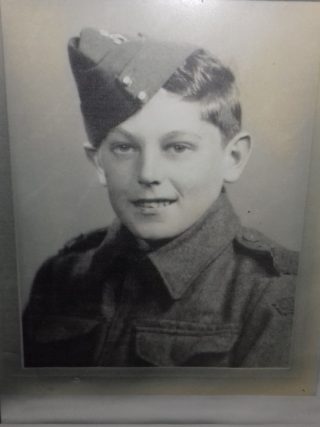 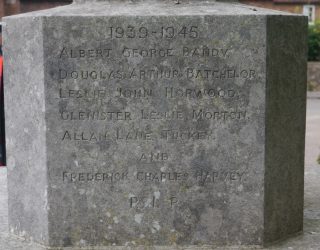 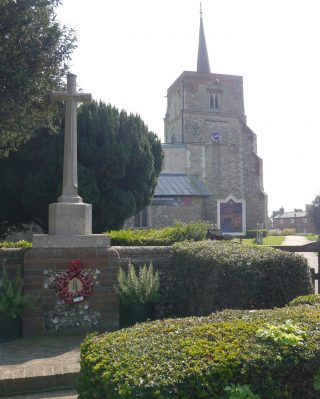 The War Memorial outside St Leonard’s 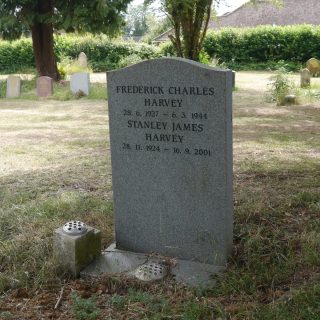 Frederick Charles Harvey, a Flamstead resident, died in an explosion in a munitions factory in Hemel Hempstead, aged just 16. Although a non-combatant, as he was carrying out war work when he died, following a campaign by the Rev. Cecil Russell, vicar of St Leonard’s, his name was included on the war memorial.

Frederick was born on 28th June 1927, the third of seven children of Harry and Alice Sophia Harris Harvey (née Squires). Frederick’s parents had married in St Leonard’s Church on the 30th September 1922, at which time Harry was working as a signalman on the Great Western Railway based at Llantrisant, Wales.

Frederick was baptised in St Leonard’s Church on the 18th September 1927, his father giving his occupation at that time to be Bricklayer’s Labourer.

Whilst living, during the war, at 20 Trowley Hill Road, Flamstead, Frederick joined the Army Cadets. His brother, Bernard Harvey, remembers him stating his dread of being called up as a Bevin Boy and working underground.

In 1944, at the age of just 16, he was employed at a Hemel Hempstead munitions factory and was killed there, in that same year, during an explosion. Brocks Fireworks Company had opened its factory, then the largest fireworks factory in the world, in Woodhall Farm, Hemel Hempstead in 1933 and it continued until the 1960s employing, in the late 1930s, as many as 500 people.

An article in the Luton News and Bedfordshire Advertiser, dated 9th March 1944, carried the sad news ….

Explosion Kills One
In an explosion at a Home Counties factory on Monday, Frederick Charles Harvey, aged 16 years and nine months, of 20 Trowley Hill Road, Flamstead, lost his life. He was helping Charles Mahoney, aged 67, who had been in the employ of the firm for 26 years to unload, from a barrow, cases of explosive materials into a magazine.

As Harvey was placing one of the cases in the magazine there was a terrific explosion followed by a series of detonations and it was remarkable that there was only one casualty. Mahoney was thrown to the ground but was not injured. Harvey’s charred body was found in the gutted magazine after the N.F.S. had put out the fires. The inquest was fixed for this afternoon.
The Herts Advertiser and St Albans Times, dated 10th March 1944, carried further details:

Factory Explosion Youth Killed
[Frederick Harvey had] worked at the factory since August 1941. [He was working] with Charles E Mahoney. … they loaded 8 cases onto a barrow and then started to place them in the magazine … Mahoney placed the first, Harvey was placing the second when [it] exploded.

There seems to be some debate over whether or not his name should have been included on the Village War Memorial given that he was a non-combatant when he died. However, there are strong clues that suggest that his name was included at the insistence of the Flamstead Vicar, the Reverend Cecil Russell, on the basis that he died whilst doing “war work”.

Frederick had a full military funeral and was buried in plot East 2/45 in “God’s Acre” on the 11th March 1944. “D” Company of the 7th Cadet Battalion, the Hertfordshire Regiment, was based at Redbourn, but had detachments in Markyate and Flamstead and it is most likely this unit that provided the guard of honour. One of Frederick’s brothers was buried in the same plot in September 2000.

This page is taken largely from information provided by Simon Goodwin.