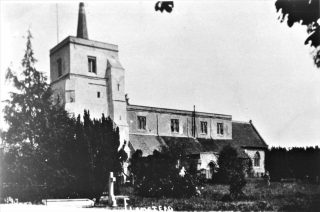 Standing on top of a hill, overlooking the Ver valley, the church has been a landmark visible to generations of travellers. Building work for the current structure is thought to have started around 1120.

The church is dedicated to St Leonard of Noblat, the patron saint of prisoners. His feast day is 6 November, which is also the birthday of Christina of Markyate, and on that date the new church was consecrated in 12th century. A short tower, half the chancel (the sanctuary) and the nave date from this time. It is possible that experienced craftsmen responsible for St Albans Abbey had some part to play in the re-construction of existing, outlying chapels, such as Flamstead’s.

The aisles, pillars and six arches are younger, but were added before St Leonard’s was instituted as a separate parish in 1223.

Further additions were made in 14th century and probably in 15th century; the north and south porches were added, the height of the tower was increased and the nave roof raised by adding a celestory. At this time too, the oak rood screen was added; figures carved in Oberammargau were added to this in 1909.

There are ten 13th century octagonal pillars made of Totternhoe clunch between the arches of the nave,  which, because of the stone’s softness, bear much graffiti carved over the centuries. The nave roof is supported by ten carved stone corbels.

The church’s wall paintings in the arcades are believed to date from 1275, when there were 12 figures representing the apostles. The remains, the lower parts of four figures, were uncovered in 1930, as were fragments of six subjects from the New Testament in the Lady Capel (north aisle), believed to date from about 1350. There are also paintings on the chancel arch and the south wall of the nave.

The bells were cast in 1664 and are said by many to have a particularly lovely tone.

Clock faces on two sides of the tower were installed in 1877.

Most recently, works have been carried out to make access level, install a small kitchen and toilet facilities, replace the seating and replace the organ with a smaller model at the east end of the nave, freeing up space for gatherings and exhibitions. Essential repair work to the nave roof and celestory windows is currently underway.