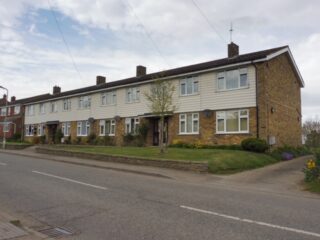 This almshouse is rarely mentioned, in contrast to the smaller but picturesque Saunders almshouse nearby. It is not mentioned by Vyse (though maybe he was concentrating on existing structures), Victoria County History (which does mention later buildings at Beechwood) or Historical Atlas of Hertfordshire. An 1880 newspaper article about Flamstead refers to the Saunders almshouses, but not to Sebright which were less than 40 years old. Wittering mentions the almshouses for 16 poor widows built in 1869. However, the Ordnance Survey maps do annotate them as the new almshouses.

John Sebright’s family included the Saunders name due to clause in Thomas Saunders’ will requiring his name to continue for residents of Beechwood Park. The lineage is recorded in Victoria County History. John was a parliamentarian and agriculturalist. He was obviously highly respected as the newspaper report of his funeral described a very long cortege and shops closing for the day. A portrait is held at the National Gallery. One example of his generosity is that he continued paying subscriptions to some organisations after he stopped using the facilities on the basis that he did not join because of his office but because they were of use to the public. Victoria County History records some of his contributions to Flamstead.

John Sebright died in 1846, at the age of 70. His will does not appear to make reference to his almshouses. Probably all the provision was set up during his lifetime so no reference would be required in his will.

Cussans notes that Sir John Saunders Sebright built a row of almshouses near the church, for the use of sixteen aged persons, who receive the dividends arising from £2744 10s 3% consols. After the payment of necessary repairs of the houses, each person received about £5 a year. A photograph in Eric Edwards’ book p205 shows the building to be a terrace of 2 storey dwellings built of flint, with a hipped roof at each end. Neither the original nor the replacement buildings would stand out for the visitor or be of significant architectural interest. Building seems to have taken some time. Edwards reports the 8 New Almshouses were unoccupied in 1838. The terrace of 4 houses, making 16 dwellings, was occupied on 5 November in 1842.

Provision for the residents was a bed and bedding, coal, and £5 per year. Eight men lived in the downstairs rooms, while eight women lived upstairs. Eligibility was for those living in Flamstead. Unlike the Saunders almshouses, church affiliation does not appear to be a requirement. The population of Flamstead in 1871 was about 2000 persons, hence a provision of 20 almshouse places (combining the Saunders and Sebright almshouses) is a substantial proportion. It could be added that the village at that time was economically on the decline due to the reduction in the straw trade.

The building was demolished in 1965 and a replacement erected on the same site. The current building is not in the possession of Sebright’s almshouse charity, but the charity has some rights of nomination.

The Saunders, Sebright and Beechwood almshouses are now a combined charity ref 214233.

There is a query. The Beechwood Almshouse Charity provided for 16 residents. Victoria County History cites that In 1843 Sebright gave £2,744 10s. consols, known as the Beechwood Widows’ Charity, income to be applied in fuel, clothing, and furniture, to the inmates of the sixteen almshouses, erected in 1869, on the Beechwood estate. The number 16 equates with the New Almshouses, but the donation date of 1843 is after they were built (not an issue for an endowment), and the Beechwood building date is 1869, rather later than the 1842 occupancy. Moreover, the Beechwood Charity refers to widows, not eight men and eight women.

A New History of Flamstead, by Eric Edwards
includes a photo of the original almshouses
Flamstead Society 1999 (ISBN 0 9519739 2 4)

Newspapers
Hertford Mercury and Reformer 25 Apr1846 page 2 col 4 contains an obituary. It refers to a long cortege, but does not refer to the  Flamstead almshouses. The publication concentrates on Hertford. Viewable on-line on the British Newspaper Archive website