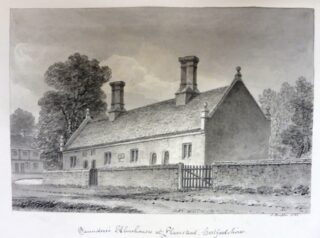 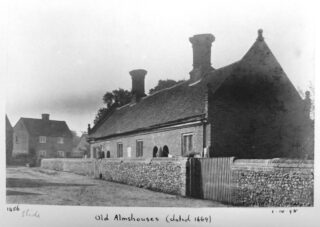 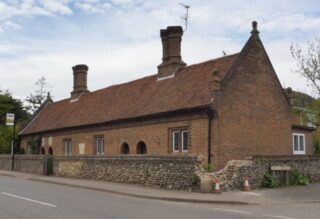 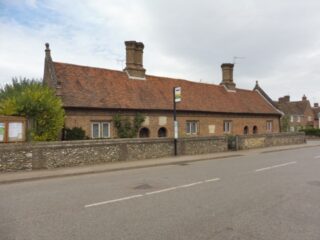 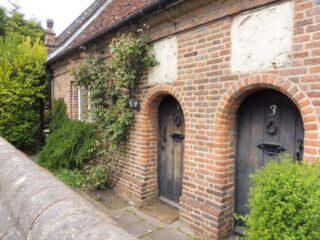 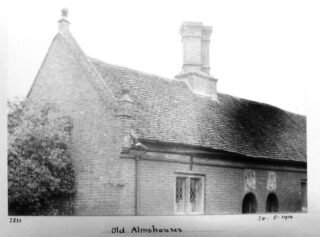 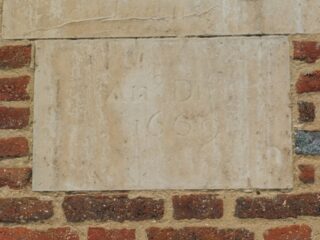 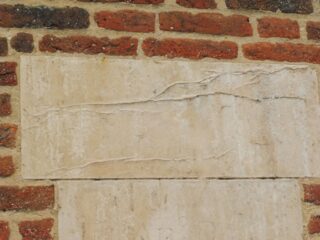 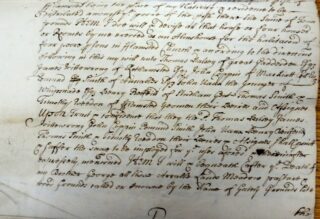 Architecturally this is one of the five most important Hertfordshire almshouses, and is one of those buildings you immediately recognise as an almshouse. It dates back to 1669, around 350 years ago. and was built by Thomas Saunders, of Beechwood. One of the datestones, now illegible, once read, ‘Sumus immortale sepulchrum Thomae Saunders de Beechwood’. The other has date details only, ‘Ano. Dni 1669’.

There was an endowment of £20, charged on the Gately Grounds.

There seems to be little information about their history. A document dated 1762 held at HALS states the almshouses ‘lately built’ were for 4 poor widows.  Victoria County History (1908) notes the four inmates received 8s a week. The residents were two poor widows and two poor widowers, who had to be of good character and resident in the ancient parish of Flamstead or within 2 miles of Beechwod.  However, the Historic England listing says each single cell dwelling was for a poor married couple. The Charity Commission listing cites persons of good character.

The buildings were reconditioned in 1952.

A look at the Charity Commission website shows that income had decreased from around £13000 in the previous years to around £8000 in 2018/9. However, there was a surge in expenditure to £51000 in that year. Note this applies to both the Saunders and Sebright charities, so may not be a reflection on this building.

Few references have been found in local newspapers. Rev. Wells left the parish in 1884, but there is a reference that he took services for the almshouse residents who were unable to attend church. Mr and Mrs Bennett, of Cleverells Park (to the south west of Markyate), celebrated their silver wedding anniversary in 1892. As part of their celebrations they regaled the parish almshouse residents with meat and wine.

The building was grade II* listed in 1952 by Historic England, with a reference 1348459. The almshouses are affiliated to the Almshouse Association and registered with the Charity Commission ref 214233-2, linked with the Sebright Charity.

This is a transcribed extract from Thomas Saunders will, made in 1688, held at Hertfordshire Archives and Local Studies ref 18878.

And first I do give and bequeath unto the Overseers of the Poor of the parish of Flamstead being the place of my nativity and residence to be distributed amongst ye poor of the parish there the sum of ten pounds. Item I do will and devise all that house or four houses or rooms erected as an almshouse for the habitation of four poor persons in Flamstead Church and according to the directions following in this my will unto [list of names] upon trust and confidence that they [list of names] shall permit and suffer the same to be employed for the uses aforesaid and hereinafter expressly mentioned.

Item I will and bequeath after the death of my brother George all those arable lands meadows pastures and good grounds called or known by the name of Gately Grounds late the grounds of Dame Mary [Luke] my grandmother and heretofore the lands of Thomas Smith of Annables unto them [list of names] upon trust and confidence that after the death of my brother George they shall let the same for any terms not exceeding the number of one and twenty years to any person or persons upon sufficient security for the greatest rent they can, twenty pounds thereof without defaultation or ablation of taxes or otherwise shall yearly and every year towards the sustention and maintenance of four poor persons as shall be hereafter in these [….] and expressed and the surplussage of the rents and profits if any shall be paid and remain unto my dear and loving wife Ellen Saunders during her natural life and after her decease to such person of my name and blood as shall be residing at Beechwood aforesaid to the right heirs of me the said Thomas Saunders……..

[Note the reference to ‘those of my name’ had implications later as the Sebright family then had to include Saunders in their family name. Also it is of interest that there seems to be little provision for major repairs or upkeep, most of the income being devoted to payments to the residents].

DE/Cm/1/24/37654 Humphrey Hulme according to uses expressed in the will of William Hulme of Flamstead, gent. Messuage at church end, orchard etc, on part of which an almshouse for four women ‘has been lately built’

https://www.charitycheckout.co.uk/charity/the-saunders-and-sebright-charities/ includes a note about the objectives and beneficiaries.