This has long been a landmark for travellers of all kinds, including pilots. When the tower was first constructed, from 1120 onwards, it was shorter than it is today. The original Norman, flint-faced walls can be seen from the ground up to the belfry floor. In 15th century, the nave was raised by the addition of the clerestory, which dwarfed the tower.  The tower was therefore raised a stage, to accommodate bells. Its increased weight had to be supported by huge angled brick buttresses. The Norman arch also came under strain from the extra weight and so a pointed reinforcing arch was added within it.

The spire on the tower is typical of a ‘Hertfordshire spike’, slender and octagonal. This was shingled in 1974. A lightning conductor was added in 20th century.

The treble bell provides the strike note for the clock, which has faces on the north and west of the tower, painted blue with gilding. This clock dates from 1877, when it cost “£129-11s-101/2d”. The mechanism is reached by a spiral staircase in the belfry and the clock has to be wound weekly. In 1879, the sexton was paid £1 a year to wind the clock.

A 17th century weathercock was replaced in 1939. The current weathercock dates from 1975. 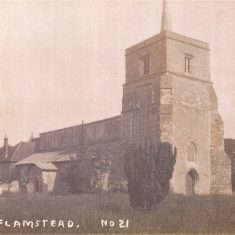 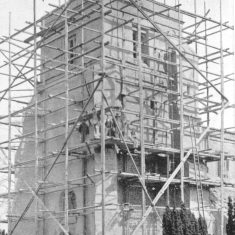 Workmen on scaffolding around the church tower, 1905
Alan Burley Collection 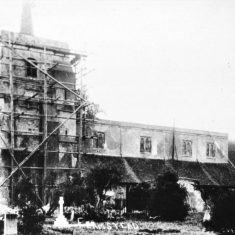 Church tower, under repair in the 1900s
Greg Thomas Collection 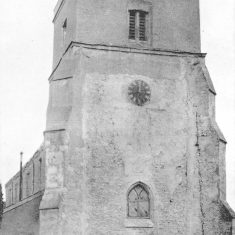 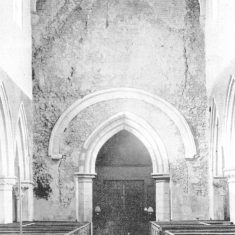 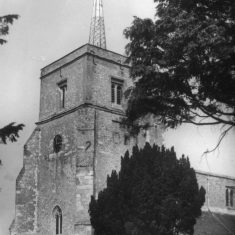 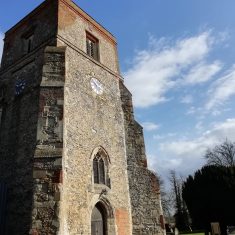