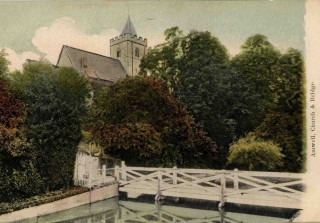 Parish church and the bridge across the New River pre 1914
by H Pratt, Hertfordshire Archives and Local Studies 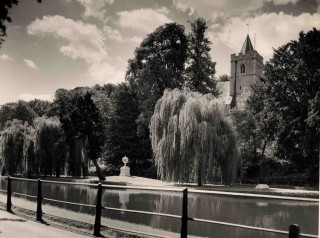 The origin of this pretty village’s name is often debated. One popular theory links the name to that of Emma’s Well which is situated below the parish church of St John the Baptist. This theory is reinforced by the reference to the village as ‘Emmewell’ in the Doomsday book.

The churchyard connected to the parish church is the final resting place of Olympic gold medallist Harold Abrahams the focus of the 1981 movie ‘Chariots of Fire’. As well as Abrahams, Great Amwell has had other notable residents including the poet ‘John’ Scott who lavishly decorated the Scott’s Grotto cave system in the neighbouring town of Ware.

The key role played by Great Amwell in the activities of the New River Company resulted in one of the most distinctive features of the village, ‘Amwell Pool’. The pool, created by Robert Mylne chief engineer of the company, is a tribute to Sir Hugh Myddelton creator of the New River. However this was not always the only large body of water in the village. For a number of years before the outbreak of World War Two Great Amwell had a one hundred yard open air swimming pool as part of ‘The Amwell Club’, situated in Lower Road.