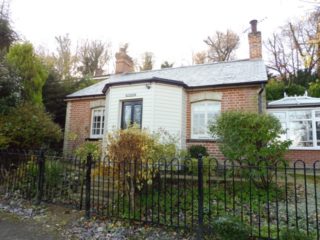 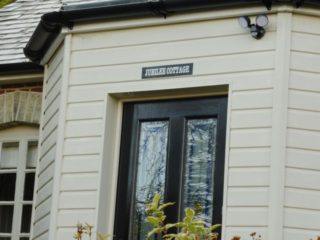 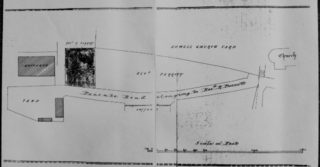 Plan from the original deed of 1887.
Great Amwell Jubilee Almshouses 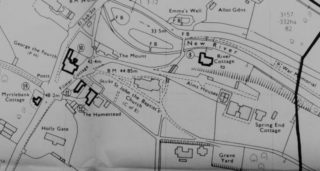 How to celebrate Queen Victoria’s golden jubilee? The first suggestion, in January 1887, was to place a clock in the church, but by March 1887 a small almshouse became the preferred option.

Rev. R. Parrott became the vicar in 1864. He and his wife Harriett gave a plot of land to the east of the church next to some glebe land. A copy of the original grant is attached. This document includes some of the rules for managing the almshouses.

By April, £120 17s. had been raised by public subscription following a door-to-door collection. It was hoped the building could be erected by June, and a dedicatory service took place on the day of the Jubilee in July. By then all the money needed for its erection had been obtained. The offering at the church service (amounting to £2 7s. 2d.) was used for furnishing the almshouses. There was no endowment, but the hope was expressed that others would follow the example of the vicar, Rev. W. J. Harvey; he guaranteed 1s. per week and half a ton of coal at Christmas.

The location is along a private road which is also a public footpath, and overlooks the New River. Vyse simply stated it was in a wooded and secluded part of the village, which initially made finding it a bit difficult. The OS 25” maps published in 1921 and 1947 show the building but do not mark it as an almshouse. It is shown as an almshouse on a Great Amwell Conservation Area map of 1975; a copy is held at Hertford library.

Beneficiaries were to be spinsters, widows or widowers who had lived in Amwell for at least 7 years immediately preceding admission. Married couples could also be considered, but both had to be incapable of earning a living. Single females were allowed to have a female companion, but she would have to vacate the property within a fortnight of the almswoman’s death. Interestingly, bachelors are not mentioned even though the initial statement refers to all indigent persons.

A bundle of papers at HALS (ref DP/44/25/4) includes the will of Charlotte Clarke dated 15 May 1945. She was then living at Weston House, Ware. The will lists her few belongings at the Amwell almshouse, which were to be disposed of.

Vyse’s thesis includes a scale drawing of the building. The living room and bedroom were each about 11ft by 8ft; the kitchen was just under 7ft by 5ft. The shared porch and the bathrooms to the rear were later additions.

On 9th May 1994 a small piece of glebe land was added, then the whole property was sold on 7th October 1994 to the recently retired vicar, the Reverend Edward Walker, and his wife. While Rev Walker was a trustee, he rightly was not involved with the finances and was not advised of the other offers. Miss Mack occupied the other dwelling. The two dwellings were later converted into one. The garage of the current building is on the additional piece of land. The property is still (2018) a private residence.

While the charity still existed as at October 2018, consideration was in hand about what to do with the receipt from the sale, while keeping within the purposes of the original deed, or agreeing a new deed with the Charity Commissioner.

This almshouse is not mentioned in Victoria County History of Hertfordshire (published 1912).