You are here: Home>Herts history>Diaries and Letters>The Diary of a Vicar's Wife at the turn of the 19th and 20th centuries

Harriet Susanna Tyrwhitt Drake (neé Potter) was the wife of the Reverend William Tyrwhitt Drake, vicar of Great Gaddesden. [i]  She kept a diary from her 19th birthday (7 September 1859) and the series held at HALS ends in 1921. This and other notes provide a glimpse of life at a vicarage during the latter part of the nineteenth century and the growth of the Mothers’ Union in the St Albans diocese.  Her husband resigned the living in 1905 and they moved to Boro’gate, St Peter’s Street, St Albans.  He died in 1915. 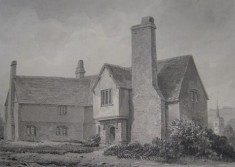 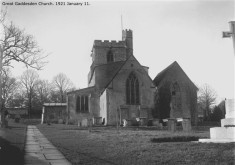 The diary is not a cheerful record.  Harriet’s life appears to have been plagued by ill-health (mainly headaches) and there are some tart remarks such as the entry for 17 October 1896: “Went up to London to see “The Sign of the Cross” a religious play.  My first visit to a theatre and very likely my last!” and 7 September1897: “My birthday but of course no celebration of it“.  However, there were holidays and other happier occasions.

The boys of the family went to school.  She noted on 19 September 1889: “Took dear little Charlie to school at Tyttenhanger Lodge. A very hard day’s work.  The poor boy so miserable and shy”.  (He was 10 years old).  However, he came home for the Christmas holidays “looking well and much improved“.  The next school was Haileybury.  !895 saw a parental visit:  “Started at 10am for Haileybury going to Leverstock Green on with the Finches and returning there for supper – Gladstone at the prize giving but did not speak. Very pleasant day and the boys all right“. 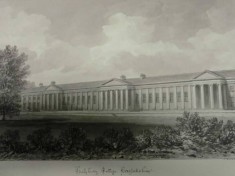 Haileybury College – Illustration by I.C.Buckler in 1831

The girls were educated at home.  Apart from the Governess, the household included a Parlour Maid, House Maid, Kitchen Maid and a Cook. The 1891 census recorded Flora Richards, age 33, as the Cook  and she remained with the family for some years in spite of some difficulties.[ii]    The diary entry for 23 December 1894 noted that “Violet [Harriet’s daughter] came to say kitchen ceiling had fallen on Mrs R – got her to bed in the Laundry and with her the rest of the day till evening meeting. Mr Hobson said no concussion but mind wandered all day“.  By 28 December she was reported to be “up and better “ but in March 1895 “Richards in bed“.  13 March:  – “Richards very bad (Hobson came and said not flue (sic))”.  Mrs Richards left them the following year – “Was very sad at parting“.  Finding a loyal and competent replacement was not easy.  A note for November 1898 states “Have got a nice little woman as stop gap but perfectly incapable as Cook”.  Another for 1922 records that  “12 October:  “Have been so depressed all the week with the cook …   25 October: “Stone our old cook came back and can’t say what a blessing it is.  She is so clean and trustworthy and cooks so well.  A great weight is off me”. 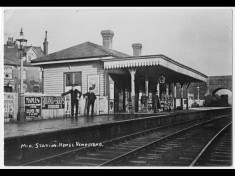 19 August: “Children had bathing tent for first time“.  21 August:  “Tent broke down“.  23 August:  “On the sands with Eunice and helped to hold up the tent while she and K [Katherine, her oldest daughter] bathed“.   30 August:   “Windy and cold but managed a bathe“.  A continental tour in 1898 also had its highlights and disappointments.  In Germany, she “at last got the girls to talk German to the others” and on 6 July they took a steamer to Vevey and were charmed by the Hotel du Lac and the lovely view.   On 12 July, they “walked to the market and then to see Nestles Milk Factory which was interesting”  then a train to Geneva and to Paris arriving on 14 July where they “washed and dressed and out to try to see Notre Dame – but alas it was the National Fete day and all shops and churches closed”.

The  Jubilee in 1897 was marked with a trip to London and local celebrations: 22 June:  “to London and places in Ludgate Hill from which heard the service at St Paul’s and saw splendidly – glorious sight – intense enthusiasm – soul stirring singing – Thank God for our beloved Queen” and on 28 June:  “Jubilee celebrations – Races, Merry-go-round boatswings, Band, Tea for all in the parish and mugs given to all the children“.  [Are there any of those mugs still out there?].

A regular note in the diaries is the time spent in preparing for Sunday School, Confirmation classes and visits to parishioners.  The note for 20 October 1889 records that she and her daughter “started for visits in Pony cart but Pony fell down on our hill and threw us out.  Cut his knee but did not break new cart. Walked to Waterend and visited 5 houses“.  There were also regular Mothers’ Meetings such as March 1895:  “Had Mothers’ Meeting and at 4.30 a tea for all our young women who have been confirmed  – spoke to them afterwards about a higher life and forming a guild and having monthly meetings“.  The post Christmas event was regularly plagued by cold weather.  The entry for 4 January 1894 noted:  “Prepared for and had M Meeting tea at 4.30.  24 came tho’ the most awfully cold day I ever knew with snow and freezing high wind.  Had Magic Lantern and guessing games and gave each a jug and basin”. By contrast , 24 September 1895: “Bad head but obliged to drive to Hemel Hempstead about a woman to nurse J Deane– very ill.  Saw Nelly Mead in Workhouse.  Heat intense“.  Another visit to the Workhouse was on 4 January 1896 “for their treat of a tea at 4.30 – Xmas tree and entertainment” which was balanced by personal pleasure 4 days later –  “W, K, V [William, her husband and daughters Violet and Kathleen] and I went to the Hatfield ball – driving to St Albans and going on by train.  A brilliant sight“.

A previous visit to Hatfield was in 1891:  “W and I went to a garden party at Hatfield to meet the Prince of Naples – whom we never saw but it was a lovely day and the whole thing a bright and pretty sight“.  Social occasions were not always to her liking.  In 1922, she recorded that:  “K & I went to a Garden Party at Ponsbourne – All people from other side of Hertford so very dull.”

Harriet’s life was not confined to parish work.  Her diary note for 29 October 1892 was ” to be Dio[cese] Sec[retary] for St Albans Mothers Union – Accepted“.  Harriet later became President and, on her resignation in 1919, Vice-President for life.

Encouraging parishes to set a branch of the Mothers’ Union resulted in visits throughout the Diocese.[iii]  Harriet also spoke to branches throughout the country plus attending conferences and Council meetings.  In 1906, she noted that she had spoken at 68 meetings and attended 8 Councils or Conferences.  She kept a record of these visits and notes on which talk she had used.[iv]

A challenge was that mothers have children.  She noted a meeting at Chelmsford in 1892:  “Large meeting in the Shire Hall – Babies somewhat noisy and speaking not easy“, another in Stratford in 1895, “gave 1st address  – Hard work against the noise of children” and Berkhamsted in 1897, “Gave address to about 60 poor mothers – many fidgety children and noisy babies and limited time made it a trying meeting“.

She was also at pains to note how many ladies (as opposed to women) were present as they were to be persuaded to run the branch.  There were some failures.  In December 1892 she spoke at Earls Colne, Essex, but  “No one seemed really prepared to start the Union and though the clergyman’s wife was there, she takes no part in the Mothers’ Meeting …. “ and in High Cross, “a Mrs Hanbury who was present and we hoped might start a branch took fright at Temperance idea as her husband had made all his money in beer“ 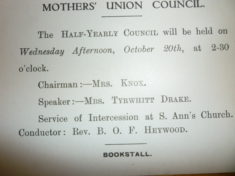 Membership was selective.    At a visit to Cole Green in 1904:  “Mrs Laurie had started a small branch with a few members and others were invited who were thought suitable to join…..    Admitted some afterwards and there was a rather awkward episode in one woman wishing to join. Mrs Hodgson [clergyman’s wife] thought not suitable, so she went off in anger“. Harriet also had firm views on who might be suitable such as at Brent Pelham in 1897:  “meeting at 2.30 of about 30 including ladies – had what seemed a dull audience of weather beaten looking women”  and in Hitchin in1901: “Lunched at Miss Mary Thompson’s and had meeting at 2.30 – about 60.  Many low looking women and many of them plaiting.  The branch was started for me when I was ill by Mrs Goodwin and she rashly admitted all who were willing with the result some are already giving the Union a bad name….” . [v]

Times were changing.  A visit in 1909 to the vicarage “of the small old parish of Letchworth with a church to hold about 60 – but now the Garden City has swallowed them up and a large new church has to be built in the centre of it.  Meeting at the vicarage.  Drawing room full and a curiously mixed audience.  The Church is in the minority and every crank and fad and fancy religion and no religion abounds.  They appeared interested and approving of a MU but baptism a stumbling block to 2 ladies“.  The following day she visited  Norton, “a similar small old parish swamped by the other side of the Garden city“.  Some years later (1925) she was to visit Welwyn Garden City. “Branch only about 25 and 22 came.  St Francis Hall (temporary church)”.

Harriet continued to give talks into her eighties.  The last recorded in her notebooks was at Aldbury on 20 September 1928.  She died in 1929.

Her diaries make little mention of her children  Her daughter, Margaret, also kept a diary which is at HALS.  Link here.

[ii]  The census is available through Findmypast, free to use at Hertfordshire libraries.

[v] She received hospitality from Mary Thompson on future visits and no more was recorded on the type of woman attending.  Reginald Hine included Mary Thompson amongst his “Hitchin Worthies”, paying tribute to her work with the occupants of the slum area of Queen Street, Hitchin, as “Verily this childless woman was the mother of them all“.  “Hitchin Worthies” is available from Hitchin Library, Central Stocks Unit and HALS (reference only), call number LOC920.042.