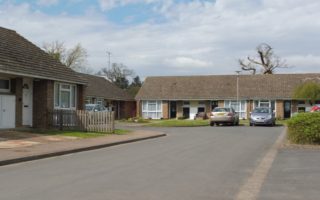 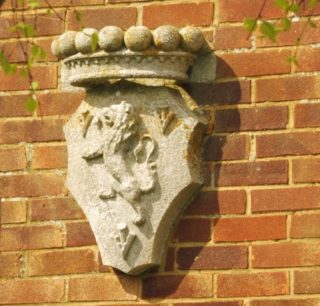 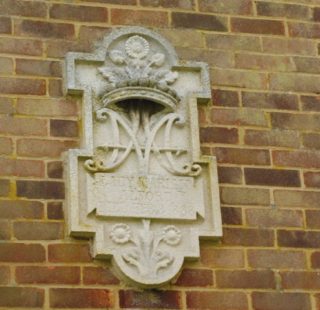 Sketch map showing the location of the Bede houses.

Few almshouses could boast of a Royal visit, but Princess Alexandra paid a visit to these almshouses in 1888 when she visited the nearby Little Gaddesden church during a stay with the Prince of Wales (later Edward VII) at Ashridge.

1888 was also the year in which Lady Marian, full name Marianne Margaret Egerton (née Compton), Viscountess Alford, died; she was born in 1817.

Obituaries found refer to her charitable works but do not mention the almshouses. Self-taught, she was accomplished in art and needlework and was one of the instigators of the Royal School of Needlework. There are several portraits and photographs of her in the National Portrait Gallery.

Marian Alford designed the Bede Houses in 1862 in memory of her husband who had died 11 years before. They were completed in 1865.

The design was influenced by G E Street and by Continental practice, being long and symmetrical.  A drawing can be found in Howard Senar’s book p78. The Bede Houses were originally five or six cottage pairs, with attached gardens, later changed to 3 dwellings. They had 10 rooms in pairs, with accommodation for 10 widows.

They are shown on the Ordnance Survey map Hertfordshire XXVI, surveyed 1877-8. The buildings seem to form three sides of a square.

Ashridge gave two tons of coal a year and 4s. a week to each widow. Medical attention was also provided.

There were rules concerning behaviour which were strictly observed. A curfew bell was rung each evening. Special prayer books were provided for the Bedeswomen. Murray’s dictionary defines ‘bede’ as a Middle English form of ‘bead’, used as the archaic sense of ‘prayer’. Hence the residents were known as bedeswomen implying that they had to pray for the founder.

The executors of the late Mr G A R Mead offered the Bede Houses to the Council with some adjacent land for £14,000. The Council built 21 bungalows, including 1 for a warden. The sundial from the Bede Houses was retained, as were two stone plaques, one with the Egerton lion and the other with the initials MA for Lady Marian Alford surmounted by a viscount’s coronet, commemorating the original building. The yew trees are also from the original Bede Houses. Bede Court (as it was now known) was officially opened on 27 October 1969.

Books and articles are held at HALS. Websites accessed May 2018.

Hertfordshire Countryside Jul 1974 p31.
Article about Lady Alford by K R Jones. He refers back to Highways and Byways of Hertfordshire by H W Tompkins 1904