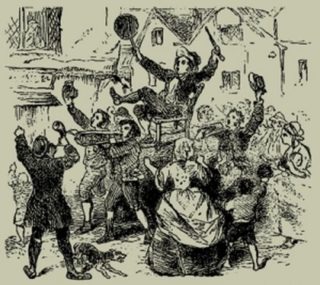 We tend to think of the modern era being a time when there’s no privacy, but in traditional village life everyone’s business was the village’s business. In particular, anti-social elements were targeted by the community as a whole, and action could range from warning, through public shaming, to forcing the wrong-doer out of the parish.

This was certainly true in Hertfordshire. Edwin Grey, in his Life in a Hertfordshire Village (1860), left an account of how this was handled in Harpenden.

According to Grey, members of the community would gather outside the offender’s house at night carrying kettles, tea-trays or any object that would make a loud, discordant noise when banged. They’d make as much noise possible for at least an hour on three successive nights. They’d also sometimes make an effigy of the offender, which would then be burnt on the village green, enabling the villagers to vent their anger without actually attacking the person.

However, Grey recalls the rule that the offender’s name must never been called out, since the police might then step in. In all the rough music parades he attended, though, Grey never remembered the authorities attempting to intervene.

Targets of the rough music parade could include adulterers, problem drunkards or tradesmen who sold in short measure, but one of the most common reasons was when men beat their wives. Such a man would first receive a warning in the form of a quantity of hay, “all thrashed”, left on his doorstep. If that didn’t have any effect, he’d be subjected to the full rough music parade, with the aim of forcing him either to mend his ways or to leave the parish.

Rough music was by no means confined to Hertfordshire. Under a variety of names, such as “skimmington” and “riding the stang”, it was common all over the country and beyond into continental Europe. Nevertheless, thanks to Edwin Grey we have a clear picture of how the tradition was used in Harpenden in the 19th century.