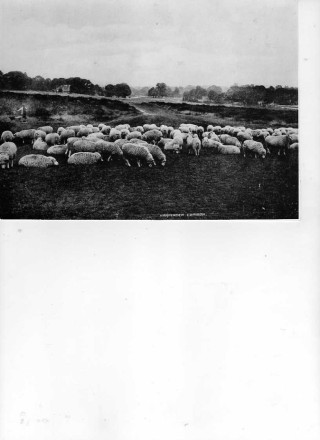 Sheep regularly grazed Harpenden common throughout the 19th century and into the early years of the 20th, coming from several farms roundabout.  These photographs date from about 1895. “Shep” Arnold, on the left, lived in a cottage near Batford Mill.  He was shepherd at Mackerye End, and each day herded his flock to the common, via Common Lane and Crabtree Lane. The Baa – Lamb trees and Vyse’s pond can be seen in the middle distance.

But the trees do not get their name from the sheep. Research by Ian Freeman has shown that in 1652 Richard Sheppard was living in a house on that site, known as “Balaams” after a previous owner.

Full details are in Harpenden Local History Society newsletter no. 13 September 1977, available at the Public Library.