The Reformation comes to Harpenden

Henry VIII's permission to the people of Harpenden to bury their dead, 1537 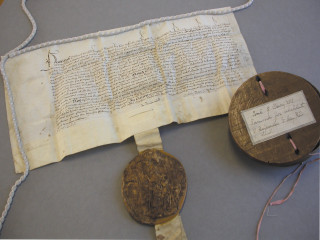 This wonderful document dates from 1537, but it refers back to an earlier document of 1320, and highlights some of the difficulties faced by Hertfordshire people at that time.

In 1320 the people of Harpenden were having problems burying their dead, especially in winter, because the parish church of Wheathampstead was 3 miles away, and the road was often impassable – being deep with mud and often flooded.

The problem was so serious that they applied to the Pope, and were granted permission to bury their dead in Harpenden rather than at the parish church.

For over 200 years all was well, but now Henry VIII is threatening to take this right away because it was granted by a ‘pretended and usurped Authority’, by whom they have been ‘seduced and deceived’.  Fortunately, Henry decides to be gracious and confirm their right with the Royal seal.

Sent to the people of Harpenden over 470 years ago, this document and its seal were preserved in a round wooden case among the records of a local estate owner, John Lawes of Rothamsted.

Did Henry VIII do the same with every local dispensation from the Pope?  Obviously the people of Harpenden were left in no doubt of who was now in charge!