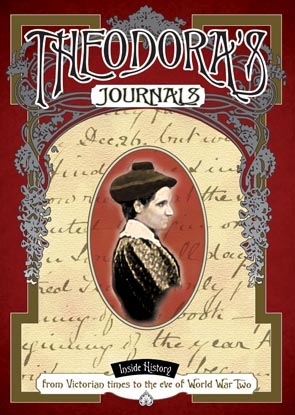 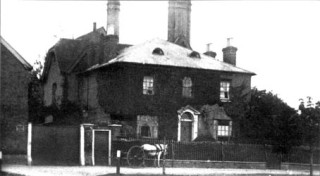 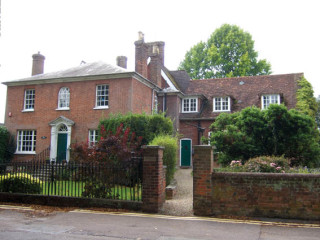 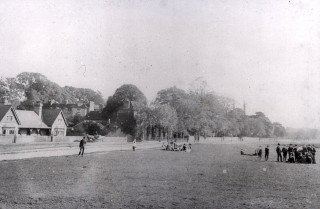 The 'Institute', with children playing on the Common
Harpenden LHS archives, cat.no. B 2.40

Theodora’s Journals, edited by Amy Coburn and Ruth Nason, is an attractive 256-page paperback, priced at £15. Details of how to order your copy are below.

Some twenty years ago Amy Coburn, a member of Harpenden Local History Society ‘discovered’ Theodora’s journals when she investigated a box of notebooks received by the Society in its early days.  Clearly it was not feasible to publish the 11 handwritten volumes covering over 50 years from 1885-1937.  However, realising their immense value as a historical source, Amy spent some years transcribing selected parts of the journals, and she has given many local history talks, based on Theodora’s material.  For the past three years she has worked with Ruth Nason, an editor and former local resident, to turn these extracts into a book. Theodora Wilson (1867-1966) lived at Rivers Lodge, next to Rothamsted Experimental Station (now Rothamsted Research) until 1926, and then in Topstreet Way until her death.

What makes the journals special?

Theodora’s journals stand out for many reasons, including:

The book is divided into time periods:

Most of the text is Theodora’s, but there are short linking pieces by Ruth and Amy, explaining particular references or summarising the passages of the journals that have been left out.  Some 50 photographs and memorabilia that Theodora included in her journals have been reproduced in the book.

Many Harpenden organisations will recognise themselves in Theodora’s journals. The Wilsons were much involved in the community.  For example, from the mid-1890s to 1908, Theodora’s father, Thomas Wilson, ran “University local lectures” which took place in The Institute (now the Friends Meeting House).  Two of Theodora’s sisters became teachers at St Hilda’s.  Her youngest brother, Denis, an architect, was on the first committee of the Society for the Preservation of Rural Harpenden (forerunner to The Harpenden Society). Theodora and other members of the Wilson family contributed towards building affordable homes for “the needy working class”.  They were staunch supporters of St John’s church, and busy in charity work and local politics. This means that Theodora’s journals are rich in information about Harpenden and its people. More than 400 names appear in the index of our book.

Think of events that took place in the 50 years during which Theodora was writing – from Queen Victoria’s golden jubilee, through the Boer War, the sinking of the Titanic, the First World War, and on to rise of the Nazis.  Think of the ‘firsts’ she experienced – aeroplanes, cars, wireless sets, suffragettes, elections with women voting, Labour government, state pensions … Theodora follows all these events and developments with interest.

How to buy your copy

You can order a copy from the Harpenden & District Local History Society – this link is to the order form – http://www.harpenden-history.org.uk/page_id__335.aspx

Amy Coburn is a founder member of the Harpenden and District Local History Society.  She has been interested in local history since her childhood, and joined Lionel Munby’s WEA classes in the early 1970s.  In 2001 she was the proud recipient of one of the first awards by the British Association of Local History for services to local history.

Ruth Nason is a book editor and Harpenden enthusiast.  Over the last three years she has worked with Amy, re-visiting the original journals and transcripts and working with book designers to develop THEODORA’S JOURNALS – and so put Theodora’s work into print, as we all think it deserves.