William Hogg and his horsedrawn cab

A stylish ride from the station 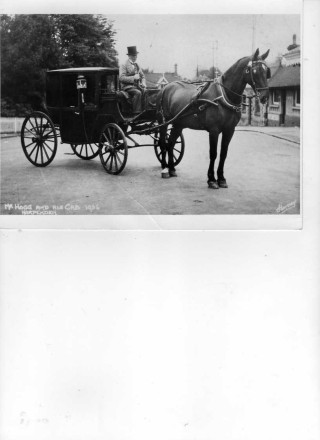 William Hogg and his horse – drawn cab, seen waiting at Harpenden Station in 1936. Mr Hogg first came to Harpenden in about 1915 to work for Mr Masson, who had livery stables connected with the Railway Hotel.  He soon started as a cabby on his own account, and prospered at first, but by the early thirties times had become very hard, and he was finding it difficult to manage.  He was then quietly befriended by a number of local people, who bought him a new Brougham, a set of harness, and a new horse, to replace his rather elderly animal. He was then able to continue his cab business from the station, in friendly competition with Read,s taxi – drivers, with whom he was always on the best of terms.  He had a moment of glory in 1931, when he appeared in a British film “Tilly of Bloomsbury” to provide a rural atmosphere.  He died in December 1936, at the age of 65.  A lifelong horseman, his last worry was about his horse’s future.