Memories of Hemel Hempstead from 1967 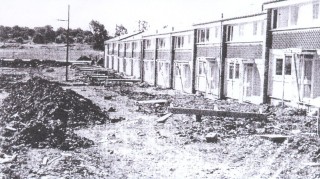 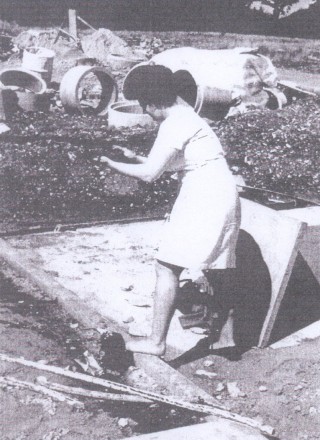 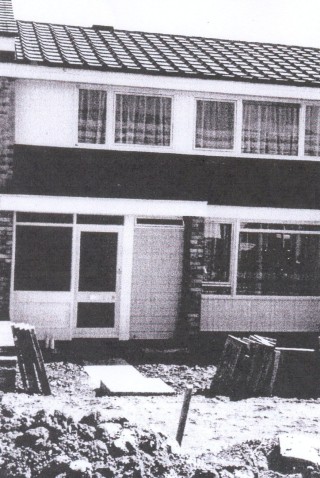 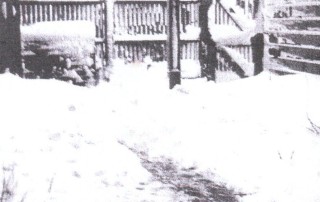 Back garden covered in snow 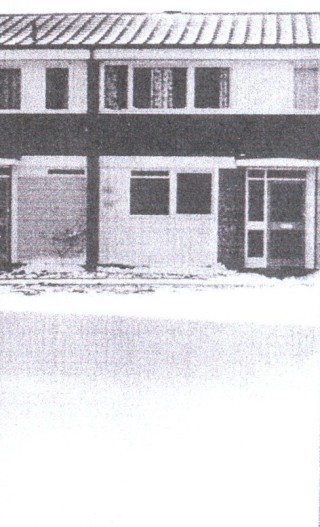 It was 1967 when we came to Grove Hill. As it was then written. This was built on land to the far north west of the town on the Redbourn Road. There had been farms and farmland before. Earlier residents of Hemel Hempstead can remember the country walks they took there. There were still the remains of the hamlet at Cupid Green with the old public house when we first arrived. This pub has long gone of course. The old listed farmhouse still survives and in 2003 was privately bought once again and is undergoing much rebuilding in the grounds. Hopefully the old house will be left to be much as it was.

The first buildings erected by the New Town Commission were completed in summer of 1967. There were 1000 dwellings between St Agnells Lane, Washington Avenue and Crawley Drive. They were a mixture of houses to rent and buy, two storey and three storey town houses and a few flats. All the roads were to be wide and all the houses were to have a garage attached or in a block. It was at the time when Milton Keynes was being built and the concept at that time was that everybody would have a car – this was still quite a new idea. The plan included car-free areas so a lot of houses looked onto open spaces while the roads wound around them.

We came because I was appointed to Apsley Grammar School as Physics teacher. We knew that accommodation at that time was offered to key workers but expected only a flat being a couple with no children. Because of the paucity in applications to live in this new development we, to our amazement, were offered a house. Like many before us we were so thrilled that we overlooked the fact we had decided we could no longer afford to run a car or furnish a whole house and accepted the offer and moved in on August 15th.

Moved in too soon

When I think back to how we were put in to live before the area was really fit for living in I find my memory played me false. I thought like all other areas we were very badly treated and moved in far too soon before even pavements were laid or any facilities offered to residents. I was very surprised when I had some old photos developed to see how in fact it was even worse than I remembered. No garden topsoil well one could probably cope. We did have to employ a man with a portable cultivator to turn the soil, which was heavy clay.

The lack of pavements in our pedestrianised way was more of a problem. The houses opposite were not completed until December, those residents moved in for Christmas. No trees planted – how we wish it had stayed that way – and of course no grass laid in what was supposed to be idyllic squares and pedestrian ways. Of course we had open fields all around and we were at the top of the hill from the town nestling in the valley so any adverse weather seemed terrible.

You can see from the photo below that when we walked three doors up to the main road it was necessary to clean our shoes even in what was obviously a sunny day in late August of 1967.

There were no shops for at least two years. A mobile van came round selling necessities. The owner of this was an Austrian living here. After a year they put a shop in a house at the far end of the estate for a year before they built some shops in a square, which is now known as Henry Wells Square. One of our first shops was a large Co-op. It had a resident butcher and at first one could get meat and cuts one wanted. They also built a very poor substitute for the old pub that they pulled down.

There was a senior school built, opened in 1967, then called Grove Hill Grammar School but I was teaching on the other side of town.

We had a doctor who had a practice in the house two doors up from us. It was a long time before a doctor’s surgery was opened but no other doctors in Hemel Hempstead would take new patients from Grove Hill.

We had our own bus. I remember that as a delight. It was our own Grove Hill bus and ran about ever half-hour down to the town and back. No detouring as they do nowadays around all the estates on the way to town. The fare was 4 old pence. It was a little old bus and had a driver and a conductor who were both working their time to retirement. This was the jolliest thing about the early days and about the only real service of any kind we had.

When we walked across the estate we came to where one day there would be the Link Road and we saw across the green swathe a walled city. It had a forbidding appearance because the flat roofed houses had been built into a long wall. This was known as Highfield 14 and led to Bellgate where the next shops were.

Some things did seemed to be better in those days because transport had not been privatised and so we could catch a double decker bus at Bellgate and go all the way to Aylesbury. After shopping we could then come all the way back at a much more civilised time than present.

Later when our new bus service bus ran to town through Highfield, cars were prohibited from going into the road from Aycliffe Drive that led to Bellgate. They had various schemes to prevent this such as a barrier that raised for the bus. There was only one entrance and exit to Grove Hill for many years and that was the roundabout at Cupid Green.

Our house, as others, was roomy and well planned except for the lack of a utility room. We had a brick built garden shed instead but as time went on I would have preferred the former. The design was very 1960s with large windows and a Swedish style, they said, of plasterboard and breezeblock with little brickwork. This has caused problems in describing the building structure for insurance.

They were often built so the sun was in the living room in the evening. This meant that many houses had the kitchens at the front, which was still a little unusual. However, they still sell and have lasted and are warm in winter but also in summer. The NTC however must have bought up 1000s of items of obsolete stock because, even though new houses, very early on if an electrician was asked to change a socket he would shake his head and say “that has been obsolete a long while”.

The first winter 67-68 was a bad one. Certainly for us. Maybe because we were still so open to the elements as there were no buildings over on the other side of our main road Washington Avenue. The winds blew and the snow came. There were quite a few inches as you see in our back garden.

When we opened the front door there was a drift half way up, blown from across the fields.

Around that time the winters still seemed to be winters. There was the year when icicles formed that hung from the guttering down to the top of the living room window.

There were three of us on this estate who taught at Apsley Grammar. We set out to walk to school, as there were no buses. We went across the top of the town through Adeyfield to Bennetts Gate taking over an hour. Not many of the pupils made it that day as we then had a large catchment area reaching to Kings Langley. Pupils also travelled from other parts of the town and they had no buses either. In those days of Grammar Schools and choice there was no well-defined catchment area.

In 1967 for senior schools we had Grammar schools and Secondary Modern schools. There were several in the town that have now been closed such as Highfield, Bourne Valley, Mountbatten and they have all become housing estates.

In 1970 the educational revolution brought Comprehensive schools to Hertfordshire as well as many other areas. Gone were the good-sized 600+ pupil schools where everybody could know everybody. In came the gigantic 1300+ schools where I would not have liked to be a pupil especially at the age of 12. Apsley Grammar and Bennetts End Secondary became Longdean School. Grove Hill School became Astley Cooper School and swallowed up Highfield School eventually. Bourne Valley was closed and Halsey School was taken into Cavendish only the old Hemel Grammar School was allowed to stay with a larger intake and a very reluctant dropping of the word Grammar from its name.

The town as I first remember it was well developed. There were better shopping facilities than we have nowadays. We had a Tesco’s and a Sainsbury’s in the Marlowes, which was open to traffic then. We had a Boots and a Timothy Whites and a large Co-op store for clothes and furniture and electrical goods. We had two proper furniture stores and we had dress shops and corsetieres and a Woolworths which was worth shopping in. The market was thriving and shopping was more interesting with less Building Societies and ‘pound shops’. It was the time when there was a pedestrian bridge to cross over the Marlowes to avoid the traffic. The Shell building making a bridge of itself was still at the end of Marlowes and the Wagon and Horses was a public house sadly missed. We had a cinema in the town and next to it a fish shop with a super restaurant attached where we had many a good fish and chip meal. There was no Kodak high rise building when we arrived, although Kodak was such an important place on the Industrial Estate that it was often suggested that the town should be renamed Kodak Town. There was no ‘magic’ roundabout or ‘funny’ roundabout, whatever you chose to call it, leading out of the town.