Memories of Hemel Hempstead from 1960 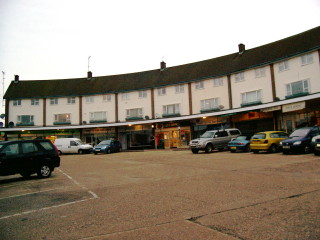 It was a glorious day at the end of May 1960. We had journeyed from South Wales in the back of a furniture van, pretty uncomfortable but very economical! I had grown up in Kent and family and friends were convinced I would be living up North. My husband had a job with G.E.C. who at that time had a small Design Office in Lord Alexandra House in Water House Street.

Welcomed with a tray of tea and a scythe

We had sold our bungalow in Wales and had been allocated a house in Lindlings, Chaulden. We moved in with the intention of buying again locally, but the prices were beyond us for quite a few years. However I liked the house, which I hadn’t seen before. Coming from a bungalow we didn’t have much furniture and it was quite a few months before we had a stair carpet. We wanted this before the midwife came to deliver our third baby. We already had a daughter aged 2½ and a son aged 13 months. The children liked the garden although the grass was about a foot high. During that first afternoon a kind neighbour appeared with a tray of tea - very welcome! She also lent us a scythe so my husband could deal with the grass in due course.

During the next week I found the few local shops, only five minutes walk away. The local Co-op is still there, as is the post office, confectioners and newsagents. In those days there was also another grocers, a chemist, a butchers and a hairdressers.

The first Saturday we all went on the bus to the market in Hemel Hempstead. (We didn’t have a car until the following year.) The bus was a small single-decker run by Bream Coaches and the fare was four old pence. The main object of the outing was to buy curtaining. The market was very busy and it was very hot. The stallholder gave me extra change to buy the children ice cream, I was quite touched. Once a week I would walk with the pram to Boxmoor for the bank and the fishmonger.

When we had been in the house for about a month, the little girl swallowed a hair clip and had to be admitted to hospital for a few days. Luckily it passed through her without trouble. I got to know the other mums and children learned to mix, so we settled down very well. In December of that year a new baby daughter was born, followed two years later by another daughter, much to my son’s disgust! However we adjusted to four children in five years - very busy but they all grew up together and are good friends.