Now Open to the public for visits and tours.

By The Paper Trail 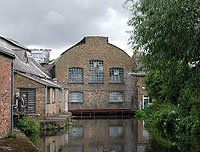 In 1803 Frogmore Mill in Apsley, Hemel Hempstead started paper’s industrial revolution when the world’s first continuous paper machine was installed and operated there.

Based on the ‘continuous wire’, an invention of Nicholas Louis Robert whose 1799 patent was purchased by London wholesale stationers, Henry and Sealy Fourdrinier,  the first Frogmore machine was built for them by Bryan Donkin in Bermondsey and installed at Frogmore Mill for production trials. It incorporated much of Donkin’s own work on the stock preparation and drying sections as well as Robert’s continuous wire.

A second, much improved and larger machine was also installed at Frogmore the following year followed by a further machine at Two Waters Mill, a few hundred yards upstream.

The cost of developing these machines and especially the many improvements that were made in subsequent years proved to be an enormous financial strain. Despite sales of machines to other papermakers, the Fourdrinier brothers were declared bankrupt in 1810 having invested £60,000 in the development of the paper machine.

Nevertheless, the technical developments in these early years proved to be a success and the continuous papermaking machine quickly spread throughout Britain and subsequently the world. A Parliamentary report in 1839 acknowledged the importance of the Fourdriniers’ contribution to the paper industry, awarding them £7,000 plus subscriptions raised within the paper industry. Their name lives on – most paper machines in use throughout the world today are still known as ‘Fourdrinier’ machines.

Frogmore Mill is still producing paper today – by hand and on machine. It is also open to the public.

The Apsley Paper Trail charity was formed in 2000 to conserve this unique historical site and make it accessible to the public. Sadly, the recent economic downturn has meant that production of paper on the 115 year-old, steam driven paper machine No2 has ceased but, artist grade paper is still made on a small pilot machine dating back to 1902 as well as by hand.

Frogmore Mill has its own visitor centre with exhibits on the history of paper, the mill, the grand union canal and the neighbouring John Dickinson’ Stationery Company that was so instrumental in developing Hemel Hempstead. The centre incorporates its own café and shop and visitors are able to undertake a guided tour of the mill as well as the opportunity to make their own paper and do letterpress printing.

The Paper Trail also offers a large range of half, one and two-day educational, craft and creative courses for ‘students’ from 5 to 95. Many of the courses are subsidised and offered at little or no cost to the participant.