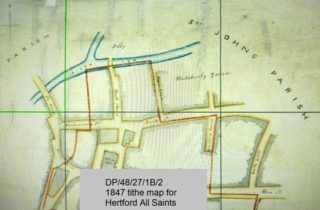 Section from 1847 All Saints tithe map. This illustrates the limited information in some records.
Courtesy of Hertfordshire Archives and Local Studies ref DP/48/27/1B2

Drains, privies, theft and squalor summarise these premises in Butchery Green. As noted in the article about the Harrison almshouses, Butchery Green had become the worst slum in Hertford by the middle of the 19th century. Some of the records about this almshouse illustrate this perfectly.

It was probably built in about 1840 in Pump Yard, which was close to Butterfield Yard. The yard consisted of 18 properties, most of which were owned by Lord Salsibury. It was a two-storey building with its own privy (shared by many others) in an area where the drainage left much to be desired.

The earliest reference is 1844, and the provider, Mr Haggar, died by 1866. There were a few members of the Haggar family in Hertford at the time, one of them being the mayor from about 1852 till about 1857.

Information is found from a handful of incidental references in contemporary newspapers. There are no references in the usual sources. The best way of illustrating this article is to quote some of the articles.

The 1844 reference sets the tone. ‘In a Yard at the back of the almshouses there is a privy in a most filthy state, which is common to many families, and it ought immediately to be repaired. The owners are said to be Mr Haggar, and Mr Nicholls’.

By 1853 the situation had not improved. References state ‘The parish would not adopt it [the deep drain], and had made a new one which was just below the surface. Six years ago the Parish refused to adopt it, and made another from Haggar’s almshouses down to the river’ and ‘At Butterfield’s lodging-house, licensed for 23 lodgers, there was stated to be no water supply and no privy, the inmates using the privies belonging to and close to the doors of Mr Haggar’s almshouses.’ The weather had been inclement at that time.

In 1854 ‘One of the inmates of Haggar’s almshouses, a widow of 82, complained of a nuisance arising from a privy in Butterfield’s yard, which is close under the window of the almshouses. – Mr Knight was directed to see the owner of the premises and make enquiry into the matter’. The only improvement is that Butterfield’s yard seems to have obtained its own privy.

A case was heard at the Petty Sessions in 1850  ‘Two old women named Harding and Griggs, one of whom lives in an alms-house in Butcherly-green, were charged with damaging a hedge on the lands in the occupation of Mr Pryor, farmer. It appeared that the defendants obtained permission to pick up sticks in one part of Mr Pryor’s fields, and that they took advantage of the privilege thus accorded them, to extend their avocations to a forbidden spot, where they seriously damaged a hedge. The Prosecutor did not wish to press the case.- Fined 2s. 6d. each including damages and costs.- The old women thanked the Bench for his lenience and promised to ‘never pick up another stick’.

A Herts Guardian edition of 1857 reported the following. ‘On the 30th ult., [1857] T. Sworder Esq. held an inquest at the Wheat Sheaf Inn, on view of the body of Ann Walker, a widow, and inmate of Haggar’s almshouses, 79 years of age, who was found dead in her bed, about nine o’clock that morning, by Anne Griggs, inmate of the lower portion of the same alms-house. She was last seen at seven o’clock the night before, well as usual. Deceased had been allowed 3s. 6d per week from St John’s, and Mrs Griggs did not want for anything’.

A less appealing inmate was Kemp. Her case was brought up before the Board of Guardians on Saturday Sep 18th 1858. ‘Among the applicants for out-relief was an old lame woman named Kemp, of Hertford, who had previously been refused out-relief on the ground that she was a notoriously bad character. Mr Crawley said that in consequence of the statement made last week to the effect that the old woman had been several times convicted of theft, he had taken the trouble to go to Mr Longmore’s to ascertain how many times she had been convicted. On looking over the minute book, he found that she had not been convicted since June 1857, when she was sentenced to be imprisoned for four days, for stealing some wood to burn belonging to Mr Dethick; and Mr Longmore and his clerk both told him that they did not think she had ever before been in prison for theft. [Discussion followed about whether character should affect payment. It appears she had been imprisoned a few times, if not for theft]. The last time she was convicted there was another case against her for breaking George Green’s gate to pieces. We saw her at it and hallooed her but she would not stop….. She has been in prison several times, and she is a notoriously bad old woman. A very few years ago, Mr Haggar gave her an almshouse, and shortly afterwards she stole his turnips; he forgave her then and she was soon caught again, upon which he turned her out of the almshouse’. [It was agreed by a majority of 1 to give her temporary out-relief].

The saddest and most illuminating case was heard by the Board of Guardians on Aug 25th 1866. ‘Mr Roberts, the relieving officer, brought before the notice of the Board a case on the out-relief list of a widow named Draper, who live in one of the old almshouses erected by the late Mr Haggar, Butcherly-green, for which she paid 4d a week rent. Mr Roberts said the house was uncomfortable and unwholesome. He had sent a woman to clean it out, and Mr Haggar had promised to lime-white it. The place was not fit for the woman to live in, and having no-one to look after her, she was covered with vermin. Mr Roberts added that Draper was a hard working cleanly woman till she fell sick, but that she was unwilling to leave the house though he had told her her pay would be taken off if she did not. Several Guardians expressed an opinion that the woman would be much better off in the workhouse, and it agreed to offer her the house’.

When the workhouse was an improvement on an almshouse, it says it all. But at least almspeople had more freedom.

These newspaper articles can be accessed on-line at the British Newspaper Archives, https://www.britishnewspaperarchive.co.uk, as at July 2019, and the quotes have been transcribed from that source.