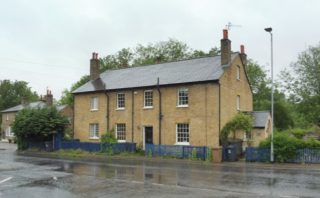 The Brickendon poor house in Horns Mill Road was built on the site of the almshouse. 2019
Colin Wilson 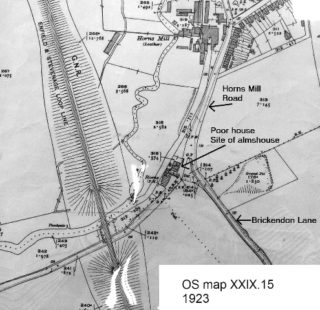 OS 25" map XXIX.15 dated 1923, annotated to show the road names and the location of the poor house.
Courtesy of Hertfordshire Archives and Local Studies

Eve Sangster’s book provides the main information for this institution. There is little about the buildings, but some references to the people.

In 1748 Edward Tyler and his wife moved into one of the almshouses in the Horns at an annual rent of 7s. 6d. After Edward’s death his wife received a pension of 4s. per week, That suggests the rent was only about 2 weeks’ pension, a token amount. The children, James and William, were put into the workhouse in 1753.

Gabriel Fletcher was a pindar [poet?] in 1753, but was poor by 1760. Ann Fletcher, Blind Fletcher and Gabriel Fletcher were receiving a weekly allowance. John Fletcher was offered a pension of 1s. per week and an almshouse at the Horns; he would be sent to the workhouse if he refused this. As most people at the time regarded the workhouse as the worst that could happen, it’s likely he didn’t have to consider his options for very long. There are records of payments made to them. John Fletcher, Blind Fletcher and John’s wife all died in 1765. Ann Fletcher died in 1769. Again there are records of payments made to her.

The Bunyan family lived in an almshouse 1819.

Eve Sangster states that the almshouses were demolished in 1833 to make way for the workhouse. The Workhouse website reports that a house on Horns Mill Road in Hertford, dating from around 1820, served as the poorhouse for the Liberty of Brickendon.