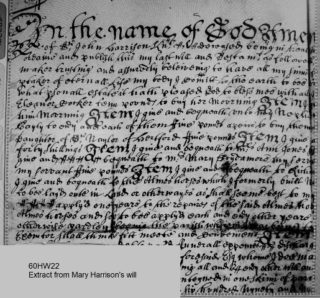 Extract from Mary Harrison's will. The reference to the almshouses is on line 14
Courtesy of Hertfordshire Archives and Local Studies ref 60HW22 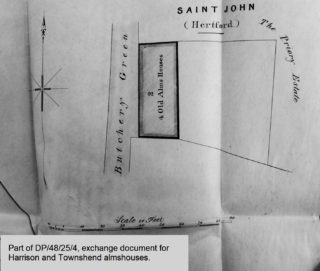 Mary, Lady Harrison knew what it was like to be without a home, if only for a few years. Her husband, Sir John Harrison, was a Royalist whose property at Balls Park was sequestered in 1645, during the English Civil War. He fled to France. Balls Park was then in the hands of a certain Mr. Rolles. He left it empty and made little use of the orchard and gardens. Lady Harrison and her children had to rely on help from family and friends. John Harrison was able to regain his property in 1648 after paying a fine of £1000; Mary had pleaded with Parliament on the grounds of destitution.

When Sir John died in 1669, Mary retained Balls Park until her death in Feb 1706 (using the modern calendar). Her epitaph is at the bottom of her husband’s memorial in All Saints church. According to Cussans, it reads, ‘Shee whoe formerly erected this monument obtain’d at length what Shee often pray’d for to bee disolu’d yt shee might be blessed with Christ though not until ye age of almost 93 Yeares, Shee dying on ye 14th of February 1705, full of days and good works which are a Monument more durable than marble or brasse her Remains reste in a neighbouring vault in hope of a Glorious Resurrection’.

While Sir John left £100 to be invested in property to produce an annual income for the benefit of the poor of All Hallows (All Saints), during her lifetime Mary built and endowed 4 almshouses at Butcherley (or Butchery) Green, along with £50 a year towards clothing and repairs. This is mentioned in her will.

The area, now renamed Bircherley Green, is roughly where the shopping centre now is, between the bus station and Bull Plain. The River Lea is on its northern edge. The 1857 document of exchange includes a site diagram but does not cover an area large enough to give the exact location. It shows the almshouses on the east side of a road called Butchery Green, adjoining The Priory Estate. The question is whether or not this is the same as Green Street. A map from Turnor’s book is included in Victoria County History between pages 490 -1. The 1847 tithe map also shows the area. Neither of these maps is detailed enough to show the location.

A further part of the endowment was that George Harrison (her grandson) left money for schools, but if they ceased to exist the money was to be used for the benefit of the almspeople.

By the mid 1800s Butchery Green had become one of the worst slums in Hertford, with open sewers and a few rarely-emptied privies. The ground floors of some properties were unusable because of the smell and ‘other matter’. It is little surprise that the almshouses had become dilapidated after a century and a half.

Mary’s great grand-daughter Audrey (heiress to the Harrison estates) married into the Townshend family. Her great grandson was John Villiers Townshend, hence the family link with Mary. He, or the dowager marquess, arranged for the replacement of the almshouses on a site near All Saints Church in 1854. The relevant authorities accepted that the exchange of the land was fair to all parties, although the exchange involved 31/2 p for 1r 6p. The names of the existing tenants are included.

An 1857 item in Hertford Mercury and Reformer concerns the sale of the first part of the Priory Estate, owned by Viscount Townshend. The four almshouses, including some garden ground, sold for £128

The History & Antiquities of the County of Hertford, by Robert Clutterbuck
Vol 2 p176
Printed by and for John Bowyer Nichols, 25 Parliament Street, London, 1827

60HW22 is Mary Harrison’s will on microfilm
DP/48/27/1B/2 Tithe map for Hertford All Saints 1847
DP/48/25/4 Office copy of order of exchange of six cottages and gardens in Brickendon for four almshouses in the parish of St John. Date 1857