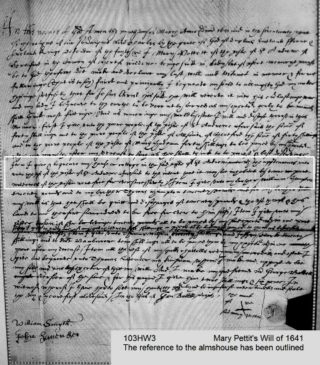 Mary Pettit's will of 1641. The section referring to the almshouse has been outlined.
Courtesy of Hertfordshire Archives and Local Studies ref 103HW3, on microfilm 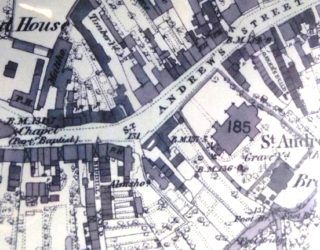 OS 1:2500 map 1881, recording the location of the almshouses
Courtesy of Hertfordshire Archives and Local Studies 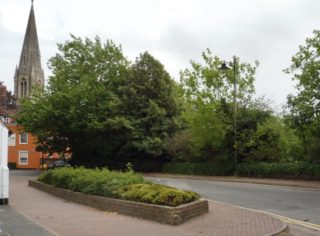 The site of Pettit's almshouse looking across St Andrew Street. The site was approximately behind where the trees are. The spire of St Andrew's can be seen. The orange building is No 51, helping to locate the site. 2016
Colin Wilson 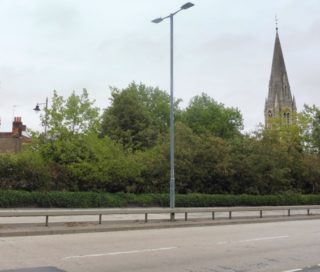 Mary Pettit put her mark at the end of her will dated 1641, indicating that she could not write. A widow living in the parish of St Andrew, she left property in her will for the poor. Starting at line 14 it reads, ‘Item I give and bequeath my house or cottage in the said parish of St Andrews [……] appurtenances unto [rector] of the parish of St Andrew aforesaid to the intent that it may be [inhabited] by two poore widowes of the parish ….’ The will is not easy to read. Most histories say two tenements, but every instance of ‘and’ in the will is written in full, and the wording ‘It may be inhabited’ suggests a single building. The property was in Cowbridge, probably now the site of Nos. 15 and 17, next to the bridge over the River Beane.

This property was exchanged for property belonging to Ann Dimsdale near St Andrew’s church, and could now accommodate 8 widows. Peter Ruffles cites the building date as 1826. In the 1838 tithe map, of plots 258-79 (all owned by Baron Dimsdale), only plots 274 and 279 are recorded as occupied by women. The site is clearly marked in the OS 1:2500 map for 1881, behind a public house [The Red Lion?] opposite Kiddill’s yard. Turnor and Cussans both say the new premises were in Old Tan Yard, which may be off Priory Street. It must be remembered that Turnor was almost contemporary with the date of the exchange. To confuse the issue still further, the Hertford Genealogy website cites 1854 as the building date.

An indenture dated 1860 concerns property ‘situate in the parish of St Andrew Hertford afsd and bounded on part of the north by certain Alms-houses….. on the south by a ditch or watercourse next the Castle Meads’. This adds some information as to location but is not very specific.

Hertford Mercury and Reformer 11 Apr 1885 p5 col 2 includes a comment by the churchwarden, Dr Warrener, that ‘the almshouses are what they are wretched things, never properly built’. An article from 1889 notes the almshouses had cemetery debt hanging over them, reducing any funds available for improvements.

Hertford needed a relief road. Gascoyne Way was built in the 1960s, meaning the almshouses had to be demolished to make way.

In 1837 a rate-payer complained about an almswoman who bought a quart of beer at 7 o’clock each morning and another at 11 o’clock. She received 3s. a week from the Board of Guardians, but this was stopped until such time as she appeared before the Board to explain herself.

In 1913 an 82 year old widow, Ann Woodward, died in a fire which was probably started by a candle. She was feeble and could walk about, but had fallen over a few times before. While two young men managed to rescue her from the house, she died the following morning, about 9 hours later. Reginald Parcell was one of the young men who tried to help. His employers heard of his courage, and arranged for a collection. He was presented with a silver-mounted umbrella inscribed with his initials.

Two points arise from this incident. Ann was not just left alone. A Mrs Carter visited her once or twice a day. The foreman of the jury also commented that the action of neighbours showed a caring attitude. The coroner was interested to know if the victim was wearing flannelette as the Government was collecting statistics about such incidents with a view to legislation.

An article by Caroline Churton on the Our Hertford and Ware website names the residents recorded in the 1911 census. Not all originally came from St Andrews, one coming from as far away as Norfolk.

The charity of Mary Pettyt still exists, its purpose stated as ‘small grants are made at Easter and Christmas to those in need who have affinity to the parish church of St Andrew Hertford’. The Charity Commission reference is 231740. However, the accounts for the year ending 2018 report no income or expenditure.

The History of the Ancient Town and Borough of Hertford, by Lewis Turnor
Pub by St Austin & Sons for the author 1830