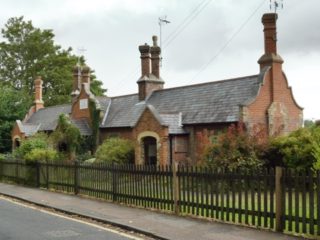 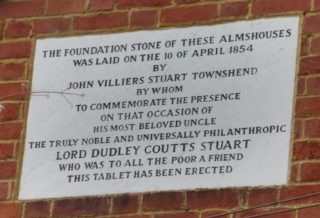 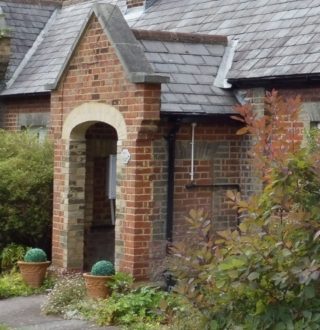 One of the porches. Note the brickwork which may indicate some alterations. 2016
Colin Wilson 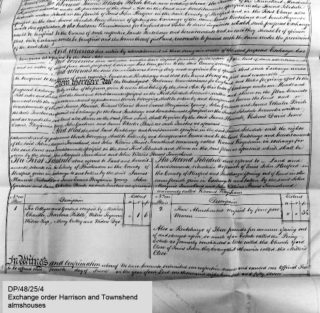 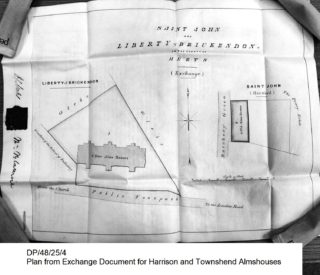 Plan attached to exchange document of 1857, showing the locations of both sites
Courtesy of Hertfordshire Archives and Local Studies ref DP/48/25/4

Where would you prefer to live – in a slum or a new building in one of the nicer parts of town? Probably doesn’t need much thinking about.

Mary Harrison, the lady of Balls Park, built some almshouses at Butchery Green in about 1700. By the mid 1850s the area was nothing more than a slum and the buildings were in a very poor state. Mary’s great grand-daughter Audrey married into the Townshend family, and Balls Park became part of the Townshend estates. Hence there is a family connection.

John Villiers Townshend, who later became the 5th Marquess Townshend, built replacement almshouses in 1854. He exchanged the land belonging to the original almshouses (or land next to the prison) for some glebe land (land belonging to the church) near All Saints church. This elicited letters to the newspapers either asking why he had used glebe land when he had plenty of his own, or complaining that placing almspeople in a more prosperous area would reduce the value of nearby properties. What was not mentioned was that other ‘charitable’ institutions in the form of schools were also erected on the glebe land. Strangely there is also a record that the land at Butchery Green was later sold by the Townshends.

The foundation stone was laid on 10th April 1854, even before the legal processes had been completed. The reason – it was John’s birthday. The existing date stone was not the one laid on that day as the building had not been erected. There are a number of detailed newspaper reports of the ceremony, including transcriptions of the (fairly flamboyant) speeches. It seems the ceremony was well attended even though it had not been widely publicised. Even so, preparations must have been made as school children took part, and food and entertainment was provided. An interesting comment made during the ceremony was that the site would make it easy for the residents to attend the church.

Six almshouses were erected. At some later date they were converted into three dwellings. The buildings themselves are now grade II listed by Historic England, although they are referred to as the Harrison almshouses.

As far as maintenance was concerned, it seems that all was provided by the Townshend family and later owners of Balls Park. Helen Faudel-Phillips died in 1916. Her newspaper obituary includes a note that she was very generous to people. She had taken over the almshouses some years before, and had entirely maintained them. Assuming they are still active in 2019, they are not affiliated to the Almshouse Association, suggesting they are still privately maintained.

Weddings, births and Christmas celebrations resulted in treats for the almswomen, particularly in the form of food.

Almshouse residents are not immune to family issues. One case reported in the newspapers from 1867 concerned Jane Elliott, a widow from Wadesmill, just a couple of miles away. Her son Jonathan Pegram was none too pleasant; he was described as a morose-looking 13 year old lad. He lived with his grandmother in the almshouses. This was against the rules, but the claim was that he only slept there, his mother providing his food. Anyway, an incident occurred when his mother visited the almshouses and ‘suggested’ he get a job. He had run away from jobs before. She promised him a pair of trousers but he became angry. After threatening to break all the windows in the house, he hit his mother on the head with a poker. The previous day he had burnt his baby brother with a hot poker, causing a burn to his grandmother’s hand. Such bad behaviour had been going on for at least a year and his mother was afraid of him. He was charged with threatening to murder his mother and sentenced to two months in prison.

These articles can also be viewed on-line at https://www.britishnewspaperarchive.co.uk. Site accessed Sept 2019
Herts Guardian, Agricultural Journal, and General Advertiser, Tuesday 11 April 1854 page: 2 and Saturday 15 April 1854 page: 4 contain details of the laying of the first stone ceremony.
Hertford Mercury and Reformer
Saturday 15 April 1854 Page: 2 cols 6,7 reports the laying of the foundation stone.
Saturday 14 April 1855 page: 3 reported that an award of the Tithe Commissioner had been obtained for exchanging a piece of glebe land (on which almshouses are being erected) for a piece of land adjoining the east end of the County Gaol.
Saturday 15 April 1854 page: 2 includes a letter complaining about reduction of land values
Saturday 12 September 1857 page: 2 col 7 reports the sale of the Butchery Green site
Saturday 23 November 1867 page: 3 col 6 reports the Pegram incident.
Saturday 12 August 1916 page: 3 col 4. Reports the funeral of Helen, Lady Faudel-Phillips. Includes an obituary and a photograph.