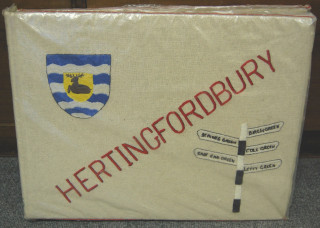 The embroidered cover of the scrapbook 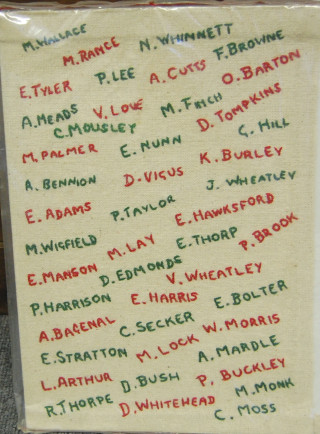 Embroidered names of the members 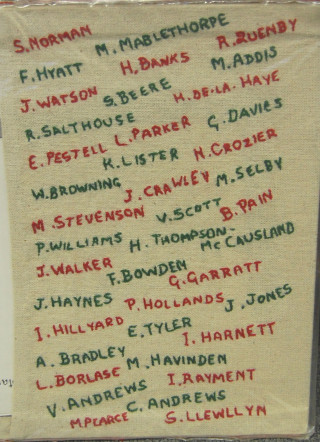 The Hertingfordbury Women’s Institute scrapbook for 1965 covers events in the parish, parish activities, the residents, WI activities and the four seasons.  These pages are an abridged version of the scrapbook, except for the last section covering the countryside, wildlife and weather for each month, which I have included in full as it makes fascinating reading.

In 1965 Harold Wilson was Prime Minister, Lyndon B Johnson was sworn in as US President while Charles De Gaulle still ruled France .  The year saw the death of Winston Churchill.

Events of that year included the banning of cigarette advertising on TV, the Post Office Tower being opened and the 70mph speed limit being introduced.

The picture of the year was My Fair Lady, mini skirts were first sold in Mary Quant’s boutique in London and the Rolling Stones released “I Can’t Get No Satisfaction”.

The scrapbook competition, ‘a true picture of our village’

In Hertingfordbury a group of WI members compiled a Village Scrapbook as part of a Hertfordshire WI and National competition in celebration of their Golden Jubilee in 1965 with the opening lines:-   “To you of future generations who turn these pages, we offer our greeting.  We hope we have presented a true picture of our village in 1965”.

A church has probably stood on this site since the 13th century. The present building dates from the 15th century and is situated on rising ground near the River Mimram on the east side of the village. The church was extensively altered in 1845. In 1890 it was found to be in a bad condition throughout and was practically rebuilt and opened again in April 1891.

The Cowper family who owned the Panshanger estate adjoining the village erected the mausoleum in memory of Spencer Cowper and his two wives; he was the grandfather of William Cowper, the poet who died in 1727.   Spencer Cowper was a barrister who as a young man was accused of murdering Miss Sarah Stout. He was acquitted of this crime in 1699 and later became a judge.

A young woman Jane Wenham was tried at Hertford Assizes on May 14th 1711 for practising witchcraft and sorcery. She was found guilty and sentenced to death but was pardoned by the Queen.  She spent the rest of her life in Hertingfordbury befriended by the Cowper family and is  buried in an unmarked grave in the Churchyard.

A single-aisled Church, St John’s celebrated its centenary in 1948.  The Queen Mother’s parents, Earl and Lady Strathmore, bought Woolmer’s Park nearby a few years before the Great War and Her Majesty the Queen, then Princess Elizabeth, and her sister the Princess Margaret worshipped at St John’s when they spent holidays at Woolmer Park.

The White Horse Inn was owned by Trust House Hotels Ltd and a double room with bath cost £3 15 shillings per night with dinner costing 11 shillings and luncheon 9/6d.

The building of Mayflower Place started in 1910 by skilled workmen from the Cole Green Estate Works, on the instructions of Countess Cowper (pronounced Cuper), as a memorial to her husband Francis Thomas de Grey, the seventh and last Earl Cowper who died in 1905. It was originally known as both the Village Hall Panshanger and the Cowper Memorial Hall. The hall was built to provide a meeting and recreation place for the families of her estate workers.  Countess Cowper died on 23rd March 1913 whilst on holiday in the south of France before the final completion of the building.  It was bought by the Masons in 1954, the name changed to Mayflower Place and in 1965 it was run by the Mayflower Catering Company.

The biggest change to affect the villages of Cole Green, Letty Green, Staines Green and East End Green was the installation of a sewer so that these villages had at last got mains water, drainage, electricity and telephone. Hertingfordbury and Birch Green had street lighting but this was rejected by the other villages as it was seen as destroying the country atmosphere.

The road from Cole Green to Hertford was straightened and Old Forge Cottage was knocked down and a new house built further back from the road for the garage owner.

The buses which were run by London Transport suffered a reduced service which was not looked on kindly by the villagers however the local authority provided buses to take children to and from school. The LNER Railway which ran through Cole Green and Hertingfordbury was closed in 1951 under the Beeching cuts.