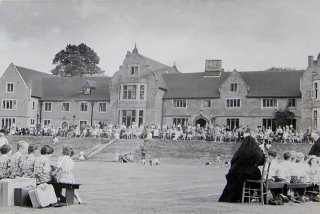 On reaching the age of eleven plus, children were sent to either Grammar or Secondary Modern schools.  The Grammar Schools being Ware Girls’, Hertford Boys’ and Welwyn High (Mixed). The Secondary Modern Schools were Sele (Mixed) and Ball’s Park (Mixed).

The scrapbook shows the fashions and fabrics that were fashionable.  It was the start of the non-iron drip-dry era and nylon was used widely as was crimplene jersey. Handbags were made of string or raffia and sling-back shoes were the rage.  The models of the time were Jean Shrimpton and Twiggie.

In 1965 most villagers were still relying on their garden produce, making jams and marmalade or preserves in jars - freezers were a rarity.

Just coming onto the market in that year were instant coffee and Uncle Ben’s Rice.

There are photographs in the scrapbook of various houses within the Parish with interior shots which show the interior design and electrical appliances of the time. Those highlighted are “Amores” in Hertingfordbury showing a date of 1563 above a door.  The School House, Birch Green, Whiteridge in Chapel Lane and 32 Birch Green.

At the December meeting of Hertingfordbury Women’s Institute, members were questioned about their holidays for the year:

Among the cars driven by residents were a Jaguar 3.4 and 3.8 ‘S’, the Morris Mini-Traveller, a Humber Super Sipe and four Minis.

Village people in the news

Tony Harris cycled from John o’ Groats to Land’s End at the age of 76 as part of a triennial event organised by the Cyclists’ Touring Club. The new High Sheriff of Hertfordshire was Mr Lucius Perronet Thompson-McCausland of Epcombs, Hertingfordbury. Mrs Pauline Brook of 57 Birch Green appeared on “Zoo Time” talking about her hobby of mouse breeding! Mr Hope Bagenal a consulting architect advised on the acoustics for the Royal Albert Hall and the Festival Hall. Mrs Abel Smith won prizes as a Daffodil breeder.

A 30-bedroom extension to the White Horse Inn in Hertingfordbury was refused by the Planning Committee.