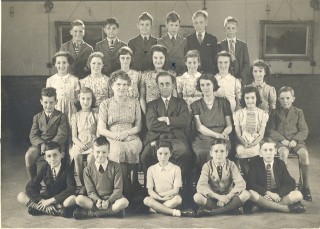 Eleven plus students at Wilshere Dacre School, 1943? Can you recognise any members of the class? 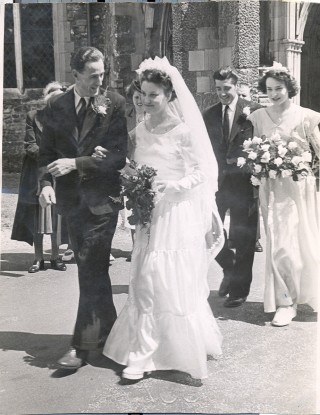 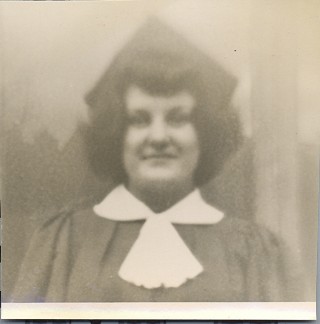 I was born at Henlow Camp in 1932 and lived with our family of eight children in two furnished RAF houses. We had to leave the camp due to the war when I was eight years old. My mother managed to rent the middle section of the Tilehouse in Tilehouse Street, no. 26,for £2.00 per week. We had to share the house initially with a family of four, the Chants, as £2.00 per week was a lot of money in 1940. The RAF allowed us to bring the furniture on loan for one year. Jackson’s auction house in Paynes Park Road was a great source of furniture and my mother gradually replaced the RAF furniture with, in some cases, some nice antiques trundled round to the Tilehouse by an old chap called Pat on his handcart. On moving day I remember running with my 10 year old brother Ken through the town as far as the Regal Cinema and back again. It was all so exciting.

We attended Wilshere Dacre School when Mr Bryant was headmaster. When the air raid sirens went off we had to go and sit along the school corridors until the all clear. I sat for the eleven plus exam and passed. I was interviewed by Miss Chambers at The Girls’ Grammar school and was duly allocated a place. The uniform was extensive but mother managed to obtain a complete secondhand set from a jewish draper who rented his shop in Wrays Alley.

My brother and I loved to go and see the cattle and sheep in Jacksons Stockyard, in Paynes Park, where the cattle auction was held. The little calves loved to suck your fingers. It is now a carpark. Accross the road was the Lairage where cages of chickens and rabbits were sold and behind that was a carpark. Two brick built structures were situated each end of a wall fronting the pavement. I believe they were toilets. Next door was the fire station. All now demolished and offices built in their place. The Lairage carpark, maternity unit and nurses hostel have gone and Safeways, now Waitrose, is in it’s place. Also a block of retirement flats, called The Maples, after a house that used to be there. I remember once the fire engine came rushing down the street and headed for Charlton to put out a fire, with all the kids running alongside, including me.

In Tilehouse Street, next to Tim’s artshop, is a small premises which used to be a sweet shop, where we loved to spend our sweet coupons. Bliss the bakers were further down and opposite was a cottage where Old Bill used to sit in the doorway, weaving baskets. Round the corner, into Bucklersbury, and on the right hand side there used to be a butchers. My mother was able to obtain offal to eake out the meat ration, which was not at that time rationed. I can remember queueing for tomatoes in the Churchyard Walk, where H R Holmes menswear now is.

My mother became a volunteer in the WRVS to collect metal for the war effort. People donated aluminium, teapots and saucepans. At the same time the church railings were removed to use the metal.

When we moved into no. 26 a Colonel Harrison lived on one side and Mrs Angelo on the other. Williams scrap metal merchants lived further up the road and he owned a small monkey we were allowed to go and see. Unfortunately it used to like to urinate over you if it got a chance. Mrs Angelo had ginger hair and used to ride about the town on what was known as a ‘sit up and beg’ bike.

When I was fourteen years old my mother was seriously ill and needed an hysterectomy. I was removed from school to enable me to help run the household. Miss Hitchcock had a small grocery shop at the top of the road where I bought supplies. I remember buying a seven pound stone jar of plum jam.

Number 26 was across the road from the Coopers Arms public house and my father enjoyed a pint after work and would treat us children to a large arrowroot biscuit, each individually wrapped in cellophane, the size of the palm of your hand.

Further down from the pub a Mrs Wright, a J.P., lived in a large three storey house, which is still there.

At about 12/13 years old I joined St Marys church choir as an alto, and we loved going around the wards at Christmas time, to sing Carols for the patients. (Not allowed now).

My sister Eileen emigrated to what was Rhodesia with her husband. I met and married my husband, Leslie, who was a friend of my brother Bob.(I was only ten years old when I first met him). My sister kept inviting my parents to join her in Rhodesia and finally when I was eighteen years old they decided to go. I was engaged to Les by then and my mother said I could only stay behind if I was married. We were married on the 24th of June 1950 in St Marys Church. I wore a beautiful dress made by my mother as she was a talented dressmaker. My mother’s friend Mrs Merryfield of the newsagents in Sun Street loaned me a hundred year old beautiful wedding veil. I remember when I came out of the house to get into the taxi to go to church I was surprised and delighted to see so many of our neighbours waiting to wave to me. My parents gave us a lovely reception at no. 26, and I left for my honeymoon in Lyme Regis in a ‘New look’ dress made by my mother. We had three children, a son in 1952, two daughters – 1954 and 1958, and we are proud to say they all went to university and obtained their degrees, which compensated me for my lost education.

When Les and I settled in Hitchin we used to buy our groceries at Moss’s Corner which is now a Vodafone shop. You were individually served and your butter was weighed and patted into shape with paddles and wrapped in greaseproof paper. The tea and sugar also individually weighed and packaged in brown bags. We were soon rented a flat by Les’s employers in 1951 in a large old house called Broadwater, near the Roebuck Inn in Stevenage and we watched the new Stevenage town being built behind us. We were delighted to be allocated a council house in 1955 in Burford Way and after some many years we were one of the first to be allowed to purchase our house by Thatcher’s government. This allowed us to get on the property ladder to buy our own house.

I was on the upper market square, with all of Hitchin, to celebrate the end of WW11.

I recall the Perks and Llewellyn’s chemist and lavender shop in the High Street, which has now been preserved in the Museum.

Notts teashop, above the present coffee shop, in the High Street. Greggs Grocery shop, frontage still there, if you look up. The Queen Mother herself remembers Morris and Nicholls Drapers shops. Spurrs where Churchgate is used a vacuum pipe system to accept payments and deliver change.

My husband Leslie was in the homeguard during the war and remembers a big tank of water installed in the lower market Square, presumably to fight fires. I remember lying in bed and hearing the convoys of troops passing up Tilehouse Street in the night.

The Post Office was in Brand Street, where I had my first job.

We used to collect hips on Oughtonhead Common for Ransomes Distillery to make rosehip syrup.