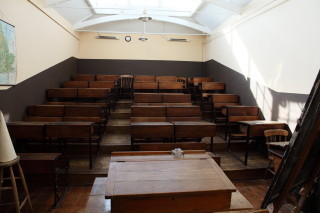 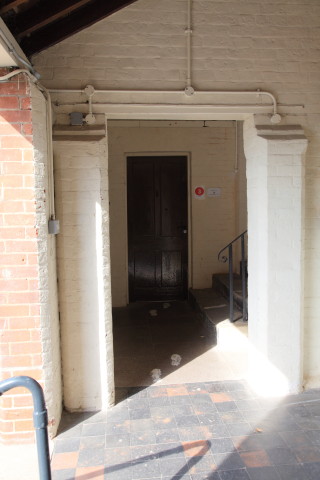 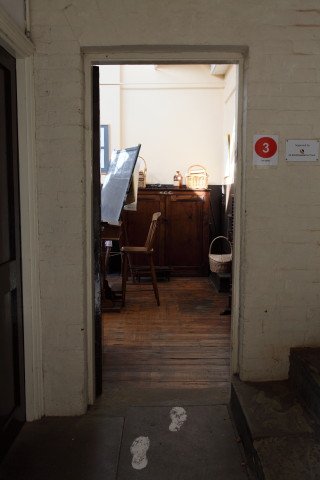 ‘I said I never want to enter the Lister [hospital] as long as I live anymore, because they reminded me so much of the school toilets, and I’ve never seen anything like them  in between!’ Margaret Grace Males. Pupil from 1913 – 1920

‘The rough toilets. They were biscuit tins filled with saw dust, in a row, you know.’ These were temporary ‘facilities’ for the boys doing gardening on the allotment, which was on the hill behind the Lancasterian Classroom. Donald ‘Jim’ Saunders. Pupil from 1918 – 1927

‘The outdoor roofless urinal. It was horrible. It was cold, damp and smelt of strong disinfectant. When you used it in the rain you could get quite wet.’ Michael Moore. Pupil from 1967 – 1969

Some classrooms had ‘A big combustion stove and a big pipe […] they used to stand in the classroom and in the winter the master used to have his desk somewhere near!’ Eric Cotton. Pupil from 1919 – 1928

‘Pupils thought that the school was haunted – thought they heard a headmaster with a limp […] I thought the site was creepy and old-fashioned.’ Jill Clinton (nee Golding). Pupil from 1968 – 1969

‘During the hot summer, with the big room filled with some 80 boys, it was almost like the black hole of Calcutta and teaching and learning was impossible. So one afternoon, Mr Hart marched us out of the school and up Park Street and into priory Park, where we settled in the shade of an elm tree and had an alfresco history lesson.’ Ken Sutton. Pupil from 1920 – 1921

‘Each teacher had a class of 40 to 60 boys and taught all subjects except those which involved leaving the school premises.’ ‘There were no school uniforms and, as a lot of pupils came from very poor families, we must have looked a pretty ragtailed and bobtailed crew. Incidentally, no one wore long trousers.’ Ken Snoad. Pupil from 1919 – 1928

‘And of course we didn’t wear long trousers in those days. We had stockings. Some of us had garters, still got the marks round your legs now!’ Eric Cotton. Pupil from 1919 – 1928

‘Both little boys and little girls were in the Infants [school] but when we left the Infants we went upstairs to the ‘Big Girls’ and the boys went to the ‘Big Boys’. May Bradsell (nee Payne). Pupil from 1911 – 1920

Subjects taught: not just the 3 Rs

‘Some of the boys had gymnasium lessons up at the gymnasium at the back of the town hall and others went swimming and the swimming pool was opposite the Bethel Chapel […] and there was a woodwork class that they used to run in the town hall as well and a Mr Dobson used to run that. […] He used to say ‘plane straight, true and smooth and at right angles to face one […] I loved them’ [the woodwork lessons] […] I liked the gym classes. The compulsory lessons included ‘Reading, writing and arithmetic, and then scripture, in that big hall. We always had scripture first thing on a morning and met there […] If we spoke during the services, or anything like that [the teacher would make them] “write that hymn out 200 times”. I’ve not finished writing mine yet!’ Sydney Walker. Pupil from 1916 – 1921

Many of our former pupils found arithmetic hard ‘Shocking, mine was. We did addition, subtraction and multiplication, pounds, shillings and pence and quarts, gallons and pints and the rest of it […] I had a little brown book that they issued us with and there was tables in there, yards and inches and all the rest of it.’ Sydney Walker. Pupil from 1916 – 1921

‘Mr Corbett got a violin class started. We used to practice in there (the Galleried Classroom) after school hours’ Eric Cotton. Pupil from 1921 – 1927

Music consisted mainly of children on a variety of instruments accompanying the teacher on the piano. Mrs Dawson was disappointed that I opted for the triangle […] I never did make it in the musical sphere.’ Peter Colyer. Pupil from 1950 – 1952

‘I do remember writing on a slate and both boys and girls were taught to knit. We could the colour of our wool and I knitted a purple and pink scarf.’ May Bradsell (nee Payne). Pupil from 1911 – 1920

‘The first thing that we had to master was the alphabet. This was taught by repetition. The second was counting, followed by how to tell the time. All this was interjected by writing lessons and recreation such as painting.’ Edward Summers. Pupil from 1953 – 1959

‘General knowledge was the name given to the amalgamation of history, geography and nature study. We had no visual or manipulative aids, apart from a few old maps of the Empire on the walls, and neither were there any text books. We just listened to our teachers telling us about [for example] the rivers in the North East: Swale, Ure, Aire, Nidd, Wharfe, Calder and Don and these we were expected to remember in rote fashion.’ Angela Hillyard (nee Monk). Pupil from 1941 -1943

‘We did swimming classes […] the swimming pool was just along Queen Street [nearly opposite the museum]and if you went at the end of the week you had to scrape the green scum off before you could get in’ Sandra Clements. Pupil from 1911 – 1920

‘Sometimes we had to go to that old swimming pool in Queen Street. Occasionally you could see the bottom of the pool but mostly it was rather murky.’ George Hubbard. Pupil from 1916 – 1921

‘Girls went swimming on [either] Monday, Wednesday and Friday for one hour. All the rest of the week was for men and boys. The water was changed on Monday, when it was freezing […] it warmed up later in the week and on Friday it was like green soup.’ May Bradsell (nee Payne). Pupil from 1911 – 1920

‘Miss Grimwood played piano for country dancing. Boys used to spit on their hands so that girls would not want to hold hands!’ Elizabeth Kelly (nee Goddard). Pupil 1961 – 1965

‘Did country dancing but no boy wanted a girl to dance with, unless they were good looking!’ Colin Little. Pupil from 1958 – 1965

On being sent to the British School:

‘Well, quite honestly, we felt a little bit grown up and rather pleased we’d chosen the British because it was a school that went in for a lot of sport. St Mary’s was very good with scholarships, but the British was well known for sport. Eric Cotton. Pupil from 1921 – 1927

‘I used to play occasionally for the second team. And they always had a good football team the British School.’ George Arberry Hubbard. Pupil from 1916 – 1921

‘We won it twice to my knowledge while I was there. The Wix [county football trophy for schools] was reckoned to be the trophy. We used to be up against schools like St. Albans.’ Eric Cotton. Pupil from 1921 – 1927

A lot of the boys came from very poor homes and could be both hard to teach and hard to manage.  ‘There were some rum houses up Tilehouse Street’  one of the ‘Tilehouse Street boys’ fell foul of a ‘Scotch’ teacher [Mr Mackie] ‘and one day he caned one of these boys and the other boy picked up the inkwell and threw it at him and it hit him and it ran all down there the ink. And they went out the window and they said ‘Goodbye’ to the school for that afternoon’. Sydney Walker. Pupil from 1916-1921

‘I can remember old Corbett (the Headmaster) coming in once, when I was in the senior class, he, some public spirited lad, had broken his cane  or hidden his cane. He came in here. He was fuming a bit. His old bow tie bristling, you know. He’d defy any boy who wanted to say anything behind his back, he wasn’t at all pleased about this episode.’ George Hubbard. Pupil from 1916 – 1921

‘Teachers were almost gods. We would never have spoken to any teacher in the familiar way my grand children do. Even my daughters say they did not either.’ May Bradsell (nee Payne). Pupil from 1911 – 1920

‘There were four classes in the ‘Big Room’, the class spaces being separated off by a number of hinged blackboards. Sometimes the sides of the board would be in use at the same time and it was deemed a great joke to pull up one side of the board, accidentally of course, so that the top tilted and hit the chalker on the other side. It became more than a joke if the victim was teacher and the outcome could be painful for the prankster.’ Ken Sutton. Pupil from 1920 – 1921

‘Various size canes were used by teachers to give corporal punishment. Miss Yorke had a short cane she called ‘Johnny’ she kept up the sleeve of her dress. She let it slip down for use when necessary, which was frequently.’ Paul Waldock. Pupil from 1940 – 1942

‘Miss Yorke was a teacher of the old-fashioned sort, well so were they all, but she was even more so. She ruled over us with a rod of iron, actually with a rod of cane, and woe betide any of us who met with her disapproval. Silence was the golden rule and we did not speak unless answering a question directed specifically at oneself and, of course, in chanting tables.’ Angela Hillyard (nee Monk). Pupil from 1941 -1943

‘Mr Hazelwood lived in a caravan called ‘Umtali’ in the school garden on Storehouse Lane. Perhaps he had connections with colonial Africa. When I left, in December 1952, he gave me a Pocket World Atlas that I still have – he judged me well, as I went on to study geography at university.’ Peter Colyer. Pupil from 1950 – 1952