Growing up in Hitchin 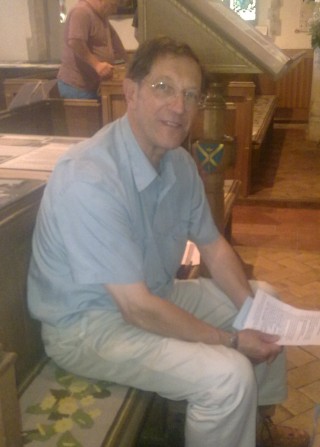 We moved to Hitchin just after the war so I grew up in Hitchin as a boy and went to Wilshere Dacre Primary School, which was great, and then to the boys grammar school having successfully passed the eleven plus  – and got my bicycle.

At primary school always did a concert in the Woodside Dell. We’d all march down there to perform – sing and there was a gymnastic display as well. The problem was the rooks coming in to roost very noisily which drowned out the dialogue! It was a lovely spot – well kept then.

There was a cattle market in Hitchin every Tuesday which was the focal point. It was in Jackson Yard and extended across Paynes Park, the Lariage. We had the pig market and the poultry market and sheep. Some of the older residents can well remember cattle coming along the streets to the market – we are going back to the early 1900s. They were tethered at Bancroft.

‘Jolly’ people at four in the afternoon

The interesting thing from my point of view was that you could go and see the cattle being auctioned. A personal memory was that all the pubs were open all day on a Tuesday – that was part of being a market town. So you could see some very jolly people at four in the afternoon! Of course you had pubs down Brand Street, like the dog, where Argos and Halfords is now. But all that came to an end – I think it was one of the last foot and mouth outbreaks around the mid-sixties which finished it off as a lot of the farmers obviously gave up their livestock. There were a lot of other changes in the town at that time architecturally too – a lot of buildings came down. Like any town it changes, it moves with the times