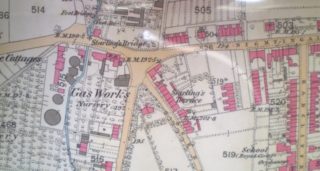 Detail from OS 25" map XII.I dated 1898, after the almshouse was demolished. It was located near the gasworks.
Courtesy of Hertfordshire Archives and Local Studies

‘Two dilapidated, tumble-down old hovels, unendowed, by Starling Bridge near the gas works’ is how this almshouse was described in the ‘Hertfordshire Express and General Advertiser’ for 29 January 1870. A picture can be found in Latchmore’s book. It shows a 2 storey building, the upper level being timber frame with infill. The walls can hardly be described as straight. The image is certainly not of a new-build property (even in 1836), so maybe the trustees simply purchased a convenient old building.

James Carter was born in Hitchin. A common custom was for people to make some charitable provision for their native town. Cussans dates his will to 1625, but Clutterbuck and Latchmore cite the date as 1660. A search on the Ancestry website (June 2019) did not provide a conclusive answer.  He provided for the rents of 2 leasehold tenements in Houndsditch, London, to be used for the benefit of the poor of the parish.

The rents were allowed to accumulate until the lease expired, when two tenements and about a rood of land were purchased at Starlings Bridge. This was in 1836, about 2 centuries after the original bequest. Clutterbuck, writing in the 1820s, notes that the lease had long since expired, so it does raise the question of what caused the delay. The inhabitants were nominated by the Churchwardens and Overseers. There was no fund for repairs. My assumption is that the accumulated  capital was used to purchase the property, but of course there were no more rents coming in following the expiry of the lease. Victoria County History records the property was sold in 1870 and the money invested in consols.

The Hertfordshire Express article continues the story. ‘The church-wardens of the parish having applied to the Charity Commissioners to be appointed trustees of the property, have received a reply. It appears that the endowment of the said charity consists of a ‘messuage or house containing two separate tenements and about one rood of land attached thereto’; there is no income accruing. The church-wardens have had the presentation to the occupancy of these cottages, and the Board of Charity Commissioners consent to make them trustees, so soon as the necessary formalities have been observed. We understand that the Rev G Gainsford, incumbent of St Saviour’s, in case the charity property were sold, would be willing to spend the whole of the purchase money in building alms-houses upon the site already given by him, on condition that the property should then vest in the trustees of his charity. The result would probably be that there were two alms-houses instead of one, but that the church-wardens of St Mary’s parish would lose their right of presentation’.

Hence the building was pulled down in 1871. In other words, accommodation was only provided for 35 years.

James Carter’s charity still exists as a linked charity of Hitchin United Charities, with a Charity Commission reference of 236308-3.

The History & Antiquities of the County of Hertford, by Robert Clutterbuck
vol 3 p54
Printed by and for John Bowyer Nichols, 25 Parliament Street, London 1827

Hertfordshire Express and General Advertiser Saturday 29 January 1870 Page: 3 col 1.
The extract in the article has been transcribed from British Newspaper Archive at www.britishnewspaperarchive.co.uk