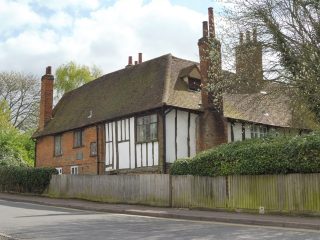 The Biggin as seen from Biggin Lane. May 2017
Colin Wilson 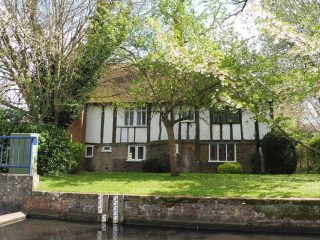 The Biggin as seen from the River Hix. May 2017
Colin Wilson 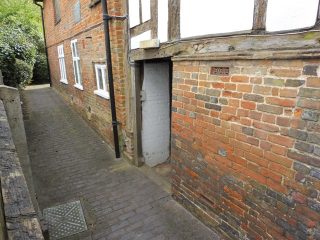 A side entrance to The Biggin. It looks rather low. May 2017
Colin Wilson 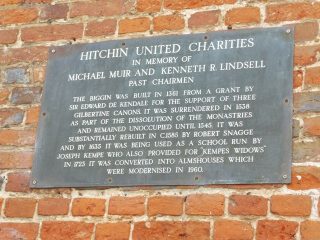 The information board on The Biggin. May 2017
Colin Wilson

The Biggin may be the only haunted Hertfordshire almshouse. During archaeological excavations in 1968-9 a skeleton was found, nicknamed ‘Old Charlie’. Later there were reports of strange sensations in the building, possibly from Charlie and his monk friends. This even led to one woman leaving.

The Biggin was the only priory for the Gilbertine Order in England. By the time of the dissolution of the monasteries under Henry VIII it seems that the building was in a very poor state of repair so may have been rebuilt in Elizabethan times. It is the oldest building in Hitchin, after the nearby St Mary’s church.

There are a number of instances where sources are unclear or contradictory.

A later owner was Thomas Kempe, a school teacher who also owned the manor house. Under his will of 1654 he left The Biggin to Ralph Skinner (who had also built almshouses) so it could be used to apprentice four boys and provide accommodation for 10 poor ancient or middle-aged women. Hence the women were known as ‘Kempe’s Widows’. Another source says he left it to his sister on condition it became an almshouse after her death. She died in 1723.

Workhouse provision was needed in 1723 so The Biggin was used for that purpose as well. But note should be taken of the information plaque saying that’s when it was converted into almshouses. How long this lasted is unclear. A 1783 vestry record notes it was unsuitable as a workhouse, but another record suggests a replacement workhouse was not found until about 1816. In this period the almswomen earned some money as they were employed on parish activities. It’s ironic that it was not suitable for a workhouse but good enough for elderly women. However, it may have been used as workhouse for only a short time.

By 1857 Hitchin United Charities had taken over the running of the almshouses. One benefit to the residents was that their allowance was doubled to 1s a week. The accommodation was altered so that 18 women could live there. While a pump was installed in the courtyard, the lead was stolen from the roof. One story is that the women found a further source of income, giving tours of the building for a fee. This led to some inequality as the fitter women would reach visitors first, those less fit losing out. This was resolved as they decided to share any such income between them all.

Only one woman, a Mrs Cannon, was required to leave the almshouse, in 1877. She was so drunk one night she had to be carried home, but of course only admitted to being a little tipsy. The repercussions were that anyone who misbehaved was liable to forfeit their allowance, the women had to attend church, and the door was locked between 10pm and 6am. This led to some jealousy about who should have the key, so any visitors then had to collect it from the trustees.

It was in 1960 that the building was modernised. At the same time the number of residents was reduced to 12.

It’s not clear when the building ceased to be used as an almshouse. It must have been after 1960, maybe at the time of the archeological excavations. It appears that by 2009 it was used for teachers’ accommodation.

Kemp’s charity, ref 236308, is linked with Hitchin United Charities and registered with the Charity Commission. The governing document is a scheme dating from 1963. The Charitable objects are ‘almshouses for residence of poor persons of good character who have resided in the ancient parish of Hitchin for not less than two years next preceding the time of appointment’. Note it does not say ‘women’.

The building was listed at II* status by Historic England in 1951.

The History & Antiquities of the County of Hertford, by Robert Clutterbuck
vol 3 p53
Printed by and for John Bowyer Nichols, 25 Parliament Street, London 1827

DE/Ha/B2055
1 May 1796
Lease (no release) of a messuage known as the Biggin, 16a of land formerly the estate of Joseph Kempe, an orchard with a building erected thereon near the churchyard,

DE/Ha/B205
Date: Jul 1852
Draft conveyances from old to new trustees of the estates belonging to various charities in Hitchin, Hertfordshire

DZ/72/P1 is a plan of the east side of Hitchin, including The Biggin gardens.

http://www.kmatthews.org/archaeology/biggin/biggin_presentation.pdf has useful information about the building and excavations. Notes possible ghosts

https://www.hitchinhistoricals.org.uk/publications/books/the-biggin/ Includes a booklet detailing the history of the building and its uses. The site also has a number of images.

www.kmatthews.org/archaeology/biggin/project_design.pdf includes a note 2009
1.3 The building is currently divided into 12 self-contained apartments which are rented to teachers working or studying temporarily in the county. The owners are considering future uses for the site that might enhance its position as the second oldest building in Hitchin after the nearby parish church of St Mary, and return it to a more general community use.

Newspaper references. These can be accessed on the British Newspaper Archive website.

Herts Advertiser Saturday 13 June 1885 page 6 col 2
Mentions it was used as an almshouse at that time.

Herts & Cambs Reporter & Royston Crow, Friday 18 September 1885, page 5 col 5
An aged inmate of one of the Biggin almshouses was found lying dead on the door. Her death was attributed to old age and general debility.