You are here: Home>Herts history>Towns and Villages>Hitchin>Hitchin Library Comes of Age : 50th anniversary of the library locating to its new building at Paynes Park on 24th May 1965

Hitchin Library Comes of Age : 50th anniversary of the library locating to its new building at Paynes Park on 24th May 1965 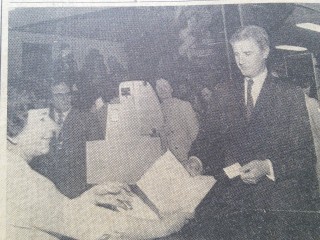 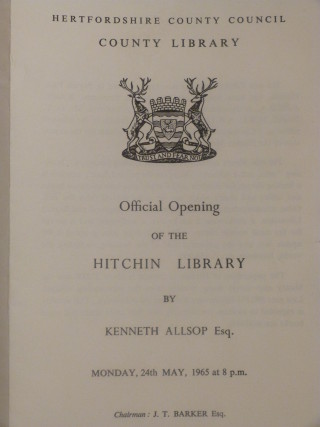 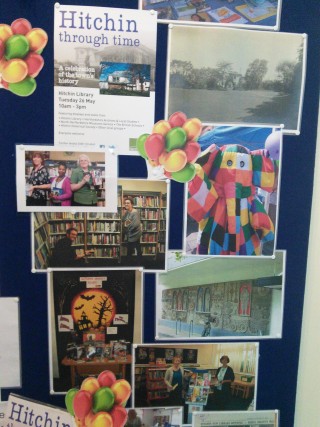 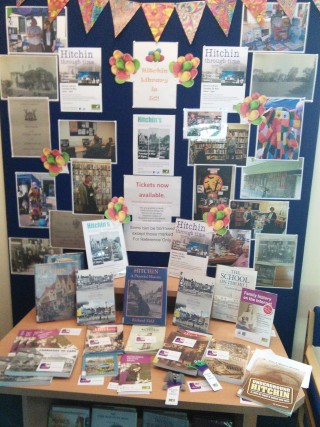 Hitchin Through Time Display May 2015

Hitchin Librarian Kay Petrie issued the first book from the new Hitchin Library to member no 1, Mr Kenneth Allsop. The new Hitchin library is situated adjacent to te museum at Paynes Park. Mr Allsop a writer and presenter on the BBC’s “Tonight” television programme commented that the ” university of the air” by which he meant the recently arrived television” would not seduce people away from reading, but help to ignite ideas and create a hunger for learning.

The new library cost £45,000 to build. Mr Allsop in his opening speech attacked the idea that the television is the enemy of the library, and suggested that a tv set should be placed in the reference area so that users could watch a documentary and then use the reference books to research more information on the programmes topic.

The new library contains a stock of 11,000 books including an attractive collection of paperbacks. The new library replaces the old library that is now part of Hitchin museum and was described in Monday speeches as ” “evidence of a civilised community and suitable for the status and needs of the town”.

The new library consists of an adult lending library, a browsing area and a reference area. Upstairs there is a lending library for children and a study area for children with tables and chairs that can be curtained off if necessary. The total floor area is 8,500 square feet. The main room appears spacious and there are two patios with attractive features including a millstone fountain. The external features of the building had been described as ” daring “by some guests, but to the majority the final result was wholly successful and had resulted in one of the towns outstanding buildings blending the old with the new.

The new building was designed by Martin Priestman, architects, in association with Geoffrey Fardell, the County Architect. Other speakers at the official opening includes Mr J.T. Barker, chairman of the North Herts Regional Library Committee. Councillar A.R.G Price Chairman of Hitchin Urban District Council, Miss Lorna Paulin, County Librarian, the book trade and many other bodies interested in ” getting books to the citizens;” (a quote from Mr Allsop) . Local MP Shirley Williams had business in the House, so was not able to attend.

Architect Mr Priestman was praised by local councillors for the design of the building. He had been given a difficult job in adding an additional wing to a 150 year old building but had created by common consensus a wonderful library. The Moss family presented “Charnwood” to the town in 1936 and two years later the Urban District Council were running it as a public library. in 1951 it was absorbed into the County library service and said Mr Barker ” I have never seen any reason to regret the step we took then. It has completely been to the benefit of the town” As part of the County Library service Hitchin readers now had acces to 1.5 million books. Mr Barker expected the impressive issues from the previous year to reach half a million in the new improved building.

During the evening tributes were also paid to the Hitchin firm of M & F  Foster Ltd who built the new library and also to their general foreman Mr Fred Foster, their manager Mr Massey , the clerk of works Mr Foy and joiner Phil Carter.

That evening Janice Brooker , senior Librarian at Hertfordshire Archives and Local studies gave a talk on ” Hitchin’s Historic Treasures” :Researching your town through the Archive’s collection.

On 27th May the library hosted a Birthday party for current and former members of staff. One of the ladies present had first started working at Hitchin Library in 1947. .