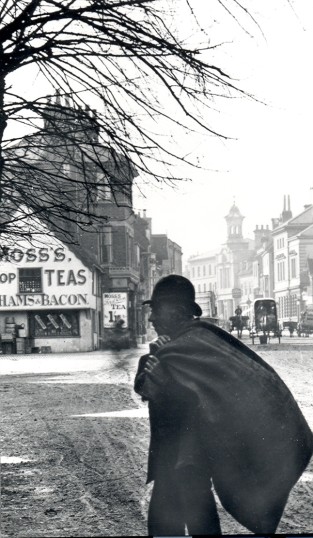 So often the past is portrayed with a ‘Downton Abbey’ style nostalgia, as a golden more simple time. And yet a glance in any history book will reveal the nineteenth and twentieth centuries as times full of social unrest and upheaval. The advent of WW1 found Hitchin acting as a microcosm of the times.

The declaration of war in August 1914 encouraged a burst of panic food buying and a consequent hike in food prices. When rumours of food shortages began to circulate in Hitchin, the ordinary working folk began to gather in the early evening of the 5th of August outside the premises of Messrs Moss and Sons, who were prominent local victuallers in the centre of town. There was a lot of shouting and booing, but with a police presence little actual damage took place. However, as the evening wore on, the crowds were swelled with a rowdier element who decided to confront Mr Moss at his house, ‘Westbourne’, in Bedford Road. Now in an uglier mood, the crowd trashed the garden and smashed windows at the property. There were calls for Mr. Moss to ‘come on out’ and even calls to ‘set the place on fire’.

However, the police were soon reinforced and were able to hold the crowd back. Mr Moss was persuaded to address the mob, promising to hold prices to what they had been the previous week. A nasty situation was controlled, although, in a last burst of vandalism,the shop window of Moss’s in town was smashed in the early hours. Mr Moss received compensation for the damage in November 1914, through the Hitchin Riot Order, though no one was actually prosecuted for the riot.

For the full story Hitchin Library has references in a number of books, in particular a pamphlet Old Hitchin Life, published in 1981 by the Hitchin Historical society.