A century of change and continuity. 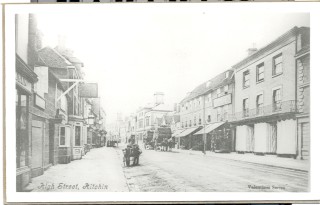 The High Street, looking towards the Market Square.Perks and LLewellyn's storefront is on the right. 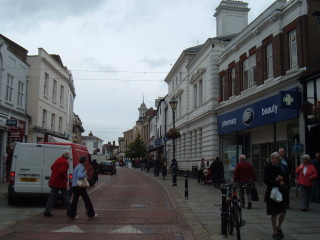 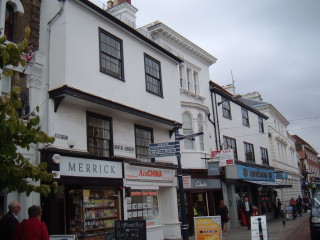 No 1 The High Street, with Merricks on the left. 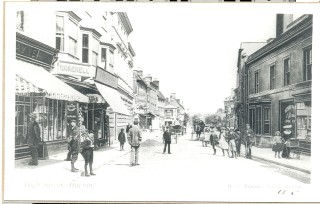 Wakewell's,(or is it Wakenell's?), the stationers, is visible on the left. 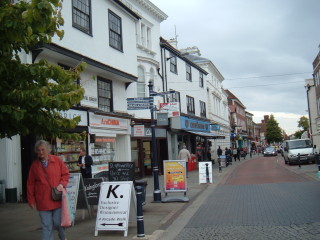 The vista looking towards Bancroft. 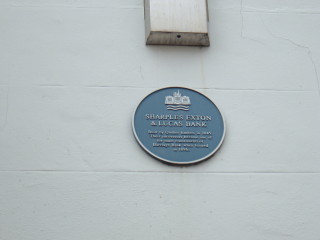 The plaque on the wall of Barclay's Bank, listing the former owners. 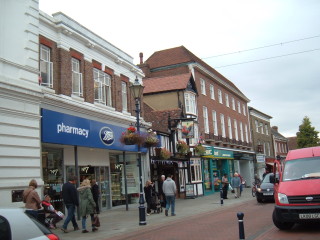 Boots the chemist, occupying the site built by Woolworths after the demolition of the bulk of the Cock Hotel.

The 1911 census is the most recent to be published and can be searched for free in your local library, using either the Ancestry website or Find my past. As well as searching for people by name, it is possible to search for addresses, although it is worth remembering that street names change, (Hitchin’s High Street was at one time called Cock Street after one of it’s principal inns), and that numbering of streets was not common before the twentieth century. Nevertheless, it is surprising how much can be uncovered about the residents, looking back at previous censuses and also at a wealth of other sources such as Kelly’s trade directories, town directories and GOAD maps (all available in your local library). Kelly’s trade directories cover the principal businesses and prominent residents in a town and cover a large period from 1790 to 1937. Town directories perform a similar function and GOAD (Chas. E. Goad, cartographer) maps show the names of all the businesses in a street on a given date (in Hitchin Library we have GOAD maps from the sixties onwards).

So what was Hitchin’s High Street like in 1911? Surprisingly, much is very familiar. At No.1 we have the Hart family, consisting of a widow, Mary (born in 1842 in Antrim, Northern Ireland), and her three children, Ernest (aged 36, born in Portsmouth), Frederick (33, born in Sheerness, Kent), and Amy (30, Sheerness also). Ernest and Amy assist in the family business, a tobacconists, which is on the site of the present day Merricks (still a tobacconists). In fact this site has been a tobacco shop all throughout the twentieth century! It appears as Merricks from the sixties onwards, in the fifties it was ‘Birtles’, and a Henry Hart was running the business there in 1886. This pattern can be seen all along the High Street, with many types of business consistently on the same site, with differing proprietors!

At No.2 we have a William (aged 43, born in Lincoln) and Edith (aged 41, born in Norfolk) Sharpe and their 4 children (ages ranging from 6 -11). The children were all born in Hitchin. William is an Ironmongers assistant – perhaps he worked for the Gatwards, whose ironmongery business was at the site of the present arcade. In 1901 the Payne family were here, running a chemists. A chemists business continues on this site throughout the twentieth century, run by the Russell family until the seventies and then becoming Kingswood Chemists by 1977.

At No.3 are Caroline Wakewell,(possibly the name should be Wakenell, the writing on the census would make either equally likely), a widow of 65, born in Kingston upon Thames, Surrey and her three daughters who all assist in the family business, a stationers. In 1901 her husband was alive and running the business. As with the Harts, running the tobacconists at No. 1, widows seem frequently able to continue running a business successfully, after the husband has passed away. It would seem that women have always played a greater economic role than the impression given by censuses, which rarely give a profession for women.  This site, which now is Cafe Nero, has been a shoe shop for a large part of the twentieth century – first Cash & co, then Turners in the sixties and seventies and finally Tandem shoes by 1988.

No.6 is the residence of Walter and Marion Whiting. Walter is 49 and his profession is listed as ‘Barclays’. This family is well-to-do, with three servants to cater for themselves and their two sons, aged 8 and 3. Marguerite Giles, 18, from Bath, is their nursery governess. Daisy Sharp, 21, is listed as a cook and home domestic and Mary Osbourne, 19, a housemaid. Daisy and Mary are both local, which seems to be the pattern. Whilst business owners hail from all around the country, domestic staff are nearly always local to Hitchin and the surrounding district. A bank has been on this site, appearing on all the censuses from the nineteenth century, to the present day. At one time there was more than one bank here, run by Pierson and Crabbe for one and Sharples, Basset, Grant and Exton as another.These merged and then eventually became part of Barclays. A blue plaque on the outside of the building commemorates its history before it was subsumed into Barclays. Barclays themselves have a Quaker connection, as did many of the prominent families in Hitchin.

No.7 is the site of the ancient Cock Hotel, for which the street was once named. !n 1911 Albert and Sarah Doughty are running the business. Albert, 56 is from Shambrook in Bedfordshire and his wife, aged 60, from London. They are assisted by their niece, Annie Harding, age 34, from Stevenage, and a Daisy Rice, age 23, from Tottenham, London, who is a barmaid. Sarah Worsley, age 24, from Hitchin, is listed as a housemaid and finally, Chas. (Charles) Lake, 28, who is described as the ‘boots’. His birthplace is listed as Piston, surely a transcription error, Pirton (just outside Hitchin) seems more likely. The Cock Hotel was once a far larger inn before a good proportion of it was demolished in the thirties to make way for Woolworths. Woolworths eventually moved to the other side of the Cock Hotel, when it constructed a brand new store in the sixties on the site of the former Perks and Llewellyn chemists. Timothy Whites, cash chemists, took over the site in a rather neat crossover. Timothy Whites pop up on sites all around the town centre, being in the 1970s on the opposite side of the road once Boots had acquired the site in the seventies. They also had premises by the Corn Exchange at one point.

No.9 is the site of the present Poundland and the now defunct Peacocks, which barely managed a year on the site! Woolworths built the current structure in the sixties, but prior to that it was the home of the well known company Perks and Llewellyn, the chemists. The lavender fields (used in their most well known products) which once abounded on the west side of Hitchin, by Mount Pleasant and Lucas Lane provided significant employment in the town. In 1911 a Richard Lewis lived on the site with his wife, Emma, his profession a pharmaceutical chemist. Richard, 38, is from Merioneth, Wales, his wife, Emma, 40, from Hitchin itself. They have three children, the eldest born in Essex. Two servants cater for their requirements – Nellie Foxon, 21, a domestic from Shingay and Rose Knight ,19, the nursemaid, from Hitchin itself. A chemist, Edward Perks, was operating here in the 1820s, so Richard presumably works for the Perks business. In 1845 Sarah Perks is shown as running the business herself – another instance of a wife continuing a business.By 1862 Samuel Perks (the son?) is listed as owner of the business. By 1878 Kelly’s directory has the business as Perks and Llewellyn, so Samuel obviously acquired a partner.

No.10 houses another tobacconist – Oliver Odell, aged 40, from Hitchin, his wife Agnes, also 40, from Haggerston and their daughter Ivy, 15. With them is Hannah Squire, aged 60 a widow from London of ‘private means’.Before the Welfare State you had to provide for yourself, so perhaps she was left money by her husband. Oliver’s business was called ‘The Pipe Shop’, an excellent photo of which can be seen in Alan Fleck’s book ‘Hitchin in Old Photographs’, alongside The Perks & Llewellyn storefront when the business premises were being sold in 1964. (This title can be seen at Hitchin Library).By 1969 Lavells is on this site, a similar business, followed finally Russell Needham (Opticians).

No.11, the current premises of Cafe Rouge, is not listed in the 1911 census, although the site was occupied by Hepworths, a men’s outfitters, for a large part of the twentieth century before becoming part of the Dixon chain by 1988.

No.12 is the home of the Natwest Bank today, as it has been throughout the twentieth century. As with Barclay’s Bank, some merging has taken place here for in the fifties it was just The Westminster Bank, with the National Provincial over the road next to the site of ‘Shoe Zone’.

This completes the review of the west side of the High Street in 1911. The census gives us a great amount of information about the inhabitants, showing both long standing Hitchin names and also a surprising snapshot of Edwardian mobility, with many people running businesses in Hitchin who hail from as far away as Ireland!

All the resources needed to research Hitchin’s history can be found in the local library. There are parish records on film, censuses from 1841 on microfilm and in hard copies, electoral rolls, a large collection of photographs, a wide variety of books on all aspects of Hitchin life, maps from the eighteenth century onwards, trade and town directories and local newpapers.

The opposite side of the High Street is to follow shortly in part 2!