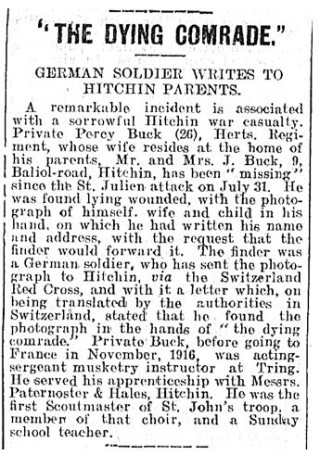 Occasionally items appeared in the newspapers during the Great War which showed a different view of the German soldier.  The papers had, from the earliest days of the War, demonised German soldiers with stories of cruelty.  Some of these tales were true as later study has proved but a proportion were undoubtedly propaganda which was used skilfully by both sides.

The article shown is taken from the Hertfordshire Express of 20th October 1917 shows another side to the behaviour of some German troops.  Private Percy Buck, of Hitchin, was declared missing in the Hertfordshire Regiment’s famous action at St Julien in July 1917 and news of his death came through the Red Cross.  As the article states Private Buck was found dying by a German soldier.  He was holding a photograph of his family which, as requested in a message on the reverse of the photograph, was returned to his family by the German through the Swiss Office of the Red Cross.

Sadly the name of the soldier is not recorded and the paper makes no comment on the event or, perhaps understandably, on the actions of the German.  The article leaves us with an insight into an instance of humanity by an enemy to a “dying comrade” that occurred in what was one of the most savage conflicts ever known.