You are here: Home>Herts history>Leisure>Threads of Time 2>Piracy and the Priory

Piracy and the Priory 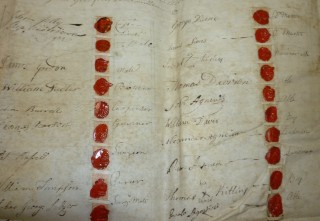 Part of the "letter of marque"
Jennifer Ayto

Pirates are associated with Penzance or the Caribbean but now we have a connection with Hitchin.

Amongst the Delmé Radcliffe collection at HALS is a document recording the signatures of the crew of the Delawar (or Delwar), a ship trading between Aleppo and Italy in 1746, under the captain, John Jolly.  The list has been transcribed:-

and also the preamble (see attachment below). This explains that this is a contract between owners of the ship, Edward and Arthur Radcliffe, and the captain, John Jolly “commander of the good ship or vessel called the Delawar furnished with a letter of marque against France and Spain and bound on a voyage to Turkey from thence to Leghorne [now named Livorno, Italy] and from thence back to London.”

The National Maritime Museum at Greenwich have confirmed that a “Letter of Marque” is a license granted by a state to a private citizen to capture and confiscate the merchant ships of another nation or, in even blunter terms, a license for piracy. This does not mean to say that the Delawar was involved in piracy as, from contemporary reports, it would appear that they sailed under convoy escort.  For example:

‘ There is advice that the Lynn Man of War arrived on the 16th of April at Skanderoon [Iskenderun, southern Turkey just north of Syrian border], with the Delawar, Jolly; and the Levant, Prince, under her Convoy’”.

The document stipulates who might receive what in the event of capturing the goods of another ship with all crew members allotted a share with the proviso that “all the officers, sailors and others belonging to the said ship shall at all times obey the orders and commands of the said captain or commander for the time being and if any of them shall refuse to or be found to be a ringleader of a mutiny or the promoter of any disturbance on board or to behave with cowardice, or gets drunk in time of action or be found guilty of any embezzlement of goods, such person or persons so offending shall not only be punished according to the law but shall also forfeit his or their share or shares of all the prizes.”

Also in the collection at HALS are reports of trade.  For example, a letter to Edward and Arthur Radcliffe in London dated 8 December 1738 reported that “The Delawar is returned from Tripoly where she tooke in 32 bales of silk” (HALS DE/R B229).  There is also a “cargazoon” (ship’s manifest) for the Delawar for January 1739 which included

Two mysteries.  What are “Filladoes” and what was in the 40 parcels of merchandise?[ii]

Whether or not all its cargo was legitimate it would appear that the Radcliffes were doing well.  Trading was expressed in Mexican silver dollars and cents and a paper dated 30 November 1740 (HALS  DE/R B226/109) noted that Mr Arthur Radcliffe’s current account stood at 29970.71 and money employed at interest 18776.40.  Quite a collection of pieces of eight.

[ii] One thought is that Filladoes are Filberts – hazel nuts were imported from Turkey.  Another is that it might be slang for filled cotton which the Oxford English Dictionary defines as  “cotton faced or sized with certain preparations serving to give the appearance of greater substance”.